Kimi Raikkonen says it is “a bit odd” that Ferrari could not work its tyres properly in Formula 1 qualifying in Singapore and was left unexpectedly struggling for pace.

Raikkonen topped the times on Friday while teammate Sebastian Vettel lapped half a second quicker than Mercedes in final practice on Saturday.

However, Lewis Hamilton claimed a surprise pole for Mercedes while Max Verstappen beat Vettel to the front row in his Red Bull, and Raikkonen could only manage fifth.

Raikkonen, who lapped 0.779s off the pace and was more than a tenth slower than his teammate, said: “We could [switch the tyres on] but not as well as we wanted and it was more difficult for sure than at any other point of the weekend.

“That is what is a bit odd. Sometimes it goes like that.

"In the end the result is not great in this kind of place where you need to have everything right.”

Raikkonen said it had been a “very straightforward” weekend up to qualifying, with no changes made after final practice, and admitted “I am a bit surprised” by the result.

Vettel told his team over the radio during qualifying that Mercedes was preparing its tyres different and Ferrari needed to take note.

Raikkonen was not sure if the slump was down to tyre preparation or a need to alter the car’s set-up.

“Everything is running smoothly and that is why I was a bit surprised because honestly it is not like it is different conditions than earlier this weekend.

“It is not the first time that sometimes you found out in qualifying that things are not as you expect, but at that point there is not much you can do.”

Raikkonen said there was not a major change in his car’s behaviour but “enough” to stop Ferrari from challenging.

He believes that minor changes would have meant it was “suddenly half a second faster because it is the nature” of the Singapore circuit.

“At a place like this it is fundamental to have it exactly as you want because there are so many corners and it is such a long track,” Raikkonen said.

“You lose even half a tenth in one place and when that happens in a few corners you suddenly have three or four tenths difference.

“That is what is tricky here. It wasn’t bad. But for sure it wasn’t as easy as it has been so far.” 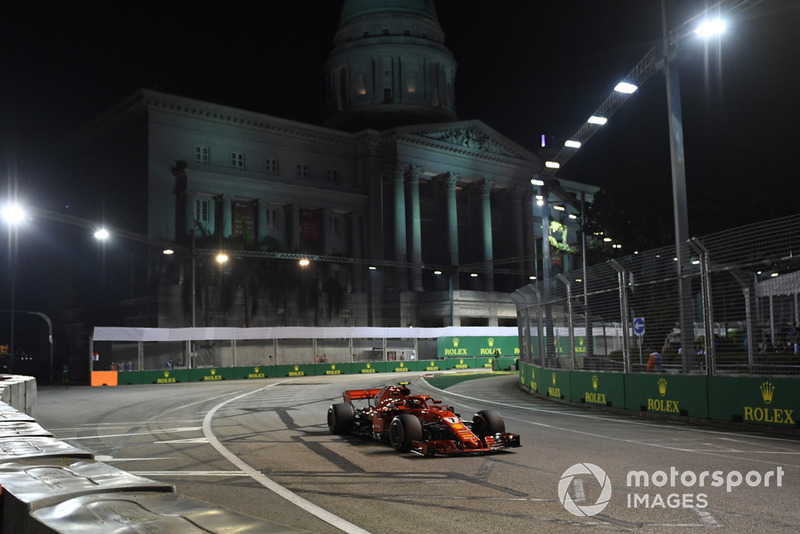