Raikkonen to step down from Ferrari role after 2018 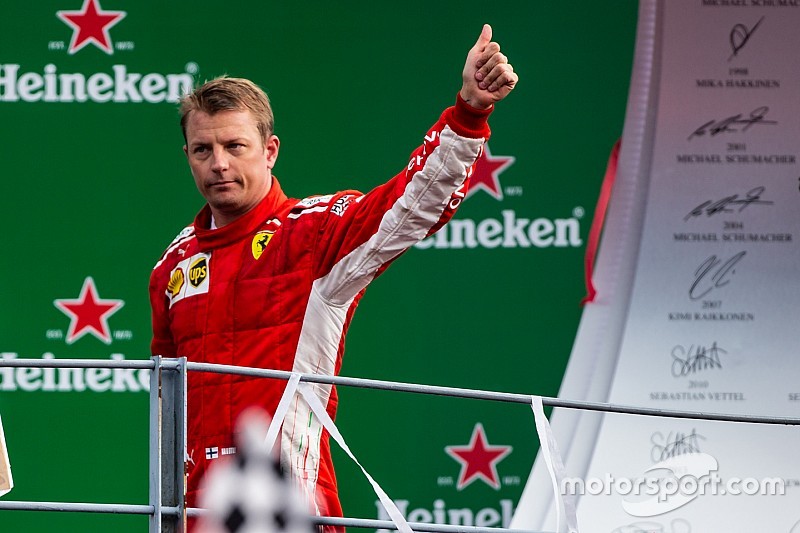 Kimi Raikkonen will step down from Ferrari at the end of this season, the Formula 1 team has confirmed, paving the way for Charles Leclerc's promotion.

Long-time Ferrari protege Leclerc had been tipped to replace Raikkonen earlier this season after a stunning start to his rookie season at Sauber.

Former Ferrari boss Sergio Marchionne passed away in July, threatening Leclerc's move and boosting Raikkonen's prospects of extending his second spell at Ferrari by another year because Marchionne's replacement as CEO, Louis Camilleri, is a supporter of the Finn.

However, the situation advanced over the Italian Grand Prix weekend when it emerged Ferrari wanted to honour Marchionne's original plan to replace Raikkonen with Leclerc next season.

Ferrari has now confirmed Raikkonen "will step down from his current role", but has not announced Leclerc as his replacement.

It is not known whether Raikkonen will end his F1 career for good at the end of the current season or continue elsewhere.

Raikkonen left F1 two years after winning the world title with Ferrari to spend two years competing in the World Rally Championship, before returning to F1 with Lotus in 2012.

He rejoined Ferrari two years later but has failed to add to his nine victories with the team in his second spell – he qualified on pole for last weekend's Italian Grand Prix but was denied the win by Lewis Hamilton.

"During these years, Kimi's contribution to the team, both as a driver and on account of his human qualities, has been fundamental," said team boss Maurizio Arrivabene.

"He played a decisive role in the team's growth and was, at the same time, always a great team player.

"As a world champion for Scuderia Ferrari, he will always be part of the team's history and family.

"We thank Kimi for all of this and wish him and his family a prosperous future."

Raikkonen will leave Ferrari as one of its most successful drivers, racking up 144 starts – only Michael Schumacher (179) has more – and nine wins with the famous team.

He remains Ferrari's most recent world champion, although current team-mate Sebastian Vettel is fighting Hamilton for the 2018 title.

Leclerc, 20, won back-to-back titles in GP3 and Formula 2 to earn his F1 graduation with Sauber this season.

He has scored a best result of sixth, in Azerbaijan, and bagged 13 points to lie 15th in the championship, outperforming his much more experienced team-mate Marcus Ericsson.

As part of the rumours linking Leclerc with Ferrari earlier this season, it was suggested that Raikkonen could head back to Sauber in a straight swap of drivers.

Raikkonen to race for Sauber after Ferrari exit