Ralf not annoyed by engine failure

Ralf Schumacher's Malaysian Grand Prix was cut short by an engine failure but the Williams man isn't worried about it. The failure was the first for BMW in 17 races and Schumacher doesn't think it compromised his position very much as he was only ...

Ralf Schumacher's Malaysian Grand Prix was cut short by an engine failure but the Williams man isn't worried about it. The failure was the first for BMW in 17 races and Schumacher doesn't think it compromised his position very much as he was only looking at a possible one point at Sepang. He started from seventh on the grid and suffered from understeer after contact with the Jaguar of Mark Webber before coming to a halt on lap 28. 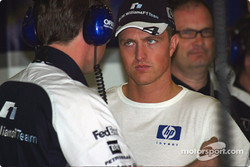 "The engine failure doesn't annoy me at all," said Schumacher, according to the team website. "We haven't experienced an engine problem for more than a season, so this isn't a major issue. I would rather have it happen in a situation like in Malaysia when eighth place would have been my best possible result anyway than at another race when I'm in the lead."

BMW motorsport director Mario Theissen said the heat at Sepang was not a contributing factor to the engine giving out and has no worries about the next race in Bahrain, which is expected to be just as hot. "The engine damage to Ralf Schumacher's car in Malaysia had nothing to do with the high temperatures in Malaysia but was due to a faulty component, which we have now identified," he explained.

Williams test driver Marc Gen? is the only man to have driven an F1 car on the Bahrain track, but Schumacher has previously visited the circuit. Ralf, like everyone else, is ready to tackle the new challenge and is curious about any problems the desert location might present.

"I'm already excited to see how the place has changed since my short visit in December last year," he said. "The race is opening new frontiers for Formula One but going to a new track inevitably throws up various questions, for example will it suit our car and how comfortable will I feel on the new track? The role the dry heat will play and whether sand will be a problem are also going to be issues we will have to face."