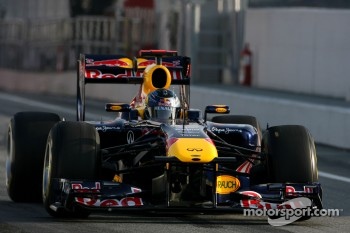 Red Bull Racing completed its final day of testing ahead of the opening race of the season with Sebastian Vettel at the wheel of the RB7.

Reflecting on the team's whole winter testing schedule, Sebastian admitted to being pleased with the team's development so far.

"The preparation has been good," said the world champion. "It was a long winter and we did a lot of kilometres, I think more than we ever have done before during testing, which is positive. Now we are just looking forward to Melbourne. If you ask me about performance, all I can say is I think we are there or thereabouts, and, as I keep saying, it's impossible to know until we get to Australia. But am I in a positive mood? Yeah, I think I am!"

Ian Morgan, Head of Race Engineering, agreed that the preparations for the first race had gone according to plan. "We have a reliable car, that has been good out of the box, and the performance looks good too," he said. "You never know how things will shake up until the end of Q3 in Melbourne, and while there are things you could always do better, I think we've done our homework well."