Feb.8 (GMM) Adrian Newey has cleared up the mystery about the 'letterbox' opening in the nose of the newly-launched 2012 Red Bull car. 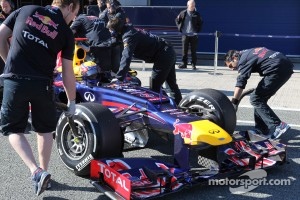 The F1 world noticed that Newey's 'step nose' differs from its rivals in the form of an air inlet where the monocoque height meets the new lower nose height.

Some surmised it must be for KERS or engine cooling, or perhaps even an F-duct style channel through to the diffuser.

Designer Newey, however, said it is to just cool the drivers.

"The toes are a bit too cold now actually," grinned Mark Webber to Italy's Autosprint.

"Traditionally the driver cooling slot is at the front of the nose," explained Newey, "but really for styling as much as anything we moved it to where you now see it to break up the aesthetics of the ramp."

Newey also took the opportunity to reject speculation he might contemplate a switch to Ferrari in the near future.

"To now leave for another team would kind of feel a little like walking out on your children in a way," said the Briton.