Red Bull "snapping at the ankles" of Ferrari - Horner 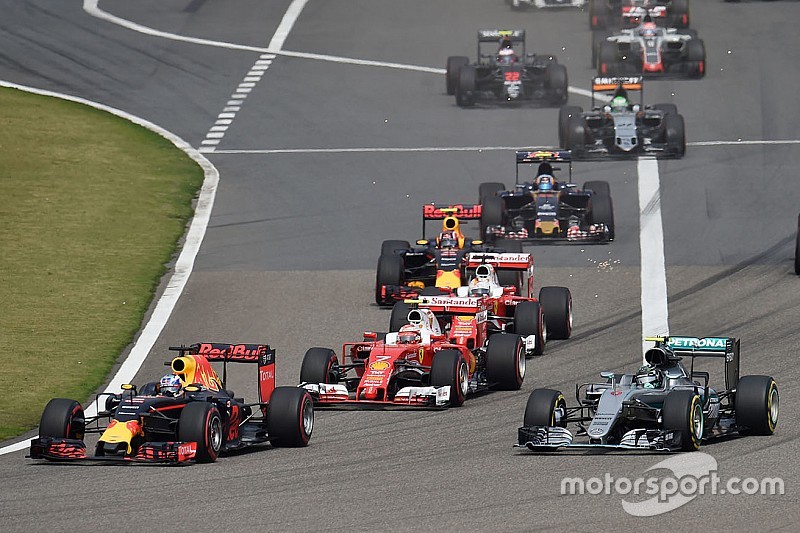 Christian Horner says Red Bull is "snapping at the ankles" of Ferrari in the battle to be Formula 1's second-best team after a strong showing in the Chinese GP.

Ricciardo was one of the stars of the race, recovering to finish fourth despite an early puncture while leading that dropped him well down the order.

"Mercedes are still a step ahead, but we're snapping at the ankles of Ferrari," said Horner after the race.

"Both our cars beat one of them today, and Sebastian Vettel wasn't so far down the road.

"A clean race from Ricciardo would have been seriously competitive. It's been a really positive weekend to only give one point away from Ferrari, we didn't expect that coming into this weekend.

"A lot of positives, and we know with what's in the pipeline that'll put us that much closer."

Ricciardo "would have been second"

Horner has no doubt Ricciardo would have finished second had he not suffered his puncture, and labelled the Australian's comeback drive as "fantastic".

"It was a great shame for him today, because having nailed the start, running in clean air, it looks like he hit some debris, cut the tyre," he added.

"He was lucky it happened right at the end of sector three – but then just to compound it, the safety car came out and screwed him completely.

"That put him down to 18th, but his recovery from there... he had to pass Raikkonen, Hamilton, all those guys… it was fantastic.

"He would have been second. I don't think he could have challenged for the win but he was comfortably the second fastest car.

"Then Kvyat picked up the baton and ran with it fantastically well from that point onwards, and drove a very tidy race.

"The middle stint, when he and Seb [Vettel] were on the same tyre, the soft, there was nothing to choose between the two.

"Seb couldn't get in DRS, but he had that last set of softs he'd saved from Q3 for the last stint versus our medium."

Kvyat voted 'Driver of the Day' in Chinese GP

Who will be NASCAR's next generation of team owners?