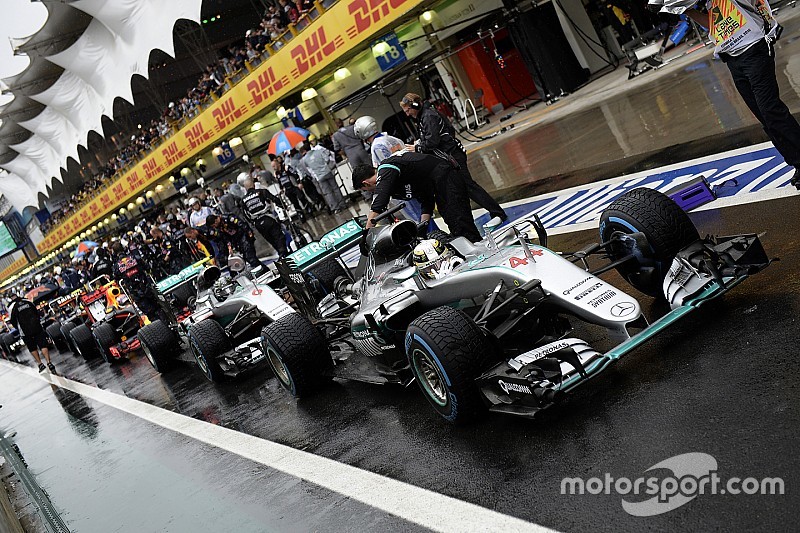 Mercedes technical chief Paddy Lowe says a change to a wet set-up was one of main factors behind Lewis Hamilton and Nico Rosberg managing to deliver a one-two finish in Brazil.

The change helped to ensure that Hamilton and Rosberg could make full use of the extreme wet tyres for the duration of the race.

At the first red flag, TV pictures showed team members in discussion with FIA technical delegate Jo Bauer while a set of scales was being used to weigh suspension components.

If any parts are replaced under red flag conditions, they cannot weigh less than the originals, and Mercedes thus had to demonstrate that the new ones complied.

“The car was set up for the dry,” Lowe told Motorsport.com. “You have to set the car up for the dry, because unless you can entirely predict a full wet race, which would be a real gamble, the car is basically always configured for the dry, which is likely to emerge at some point in a race.

“However, as it was clear within the race that this was rain that was not going to stop, we actually switched to a wet set-up, effectively moving the roll balance forward to give better wet balance.

"You’ve got to take care in that situation not to put on parts that are lighter, so the FIA were involved. We had some kitchen scales up there, and made sure it was all OK!

“The pace was good, the drivers weren’t suffering, and the balance looked pretty good in the race, which was part of them not putting a foot wrong.”

Lowe conceded that the team was fortunate that the new parts were not lighter, and thus could be swapped in this way: “To be honest, it’s something that we should take a bit more care of in the future to plan it that way. It’s not something that we’ve deliberately constructed.”

Set-up changes are relatively rare during red flag suspensions, although, when still at McLaren, Lowe was involved with a famously successful example at the 2011 Canadian GP, with Jenson Button.

“That was the most similar situation, where you’ve got a race that’s wet and it stayed wet," said Lowe. "But in that race it was a more a matter of brake ducts, wheel heating, tyre heating.

"That was the one we got right, so Jenson managed to win from being right at the back.”

Ecclestone to push Strategy Group to throw away F1 rulebook