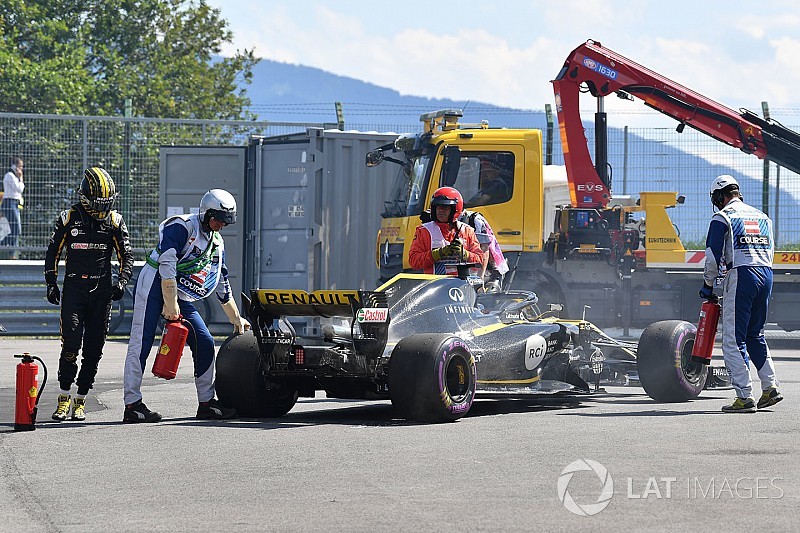 Nico Hulkenberg will not be able to reuse the Formula 1 engine that failed on him during the Austrian Grand Prix, Renault has confirmed.

Hulkenberg retired from the Red Bull Ring F1 race after a spectacular turbo failure and Renault team boss Cyril Abiteboul said the French manufacturer would introduce a fix at Silverstone to prevent a repeat.

Post-race in Austria, Abiteboul suggested the turbo would be the only component that needed changing: "Nico's turbo is definitely dead, but the ICE [internal combustion engine] and the other components should be OK."

But the FIA confirmed ahead of Friday practice at the British GP that Hulkenberg has taken a new engine, as well as turbo, for this event.

Hulkenberg will now face grid penalties if he takes the 'spec-C' engine upgrade Renault has planned for later in the season, and the team's chassis technical director Nick Chester confirmed the turbo failure in Austria also took out Hulkenberg's ICE, and that it cannot be used again.

"Unfortunately it's gone," Chester said, when asked by Motorsport.com if the unit could be salvaged.

"When the turbo failed, we ingested some debris through the engine and damaged it so we can't really use it [again]."

Ferrari is threatening an upset at its bogey circuit