Renault drivers Jarno Trulli and Fernando Alonso are ready for action after a winter waiting for the new season to begin. The team and drivers have been working hard the last few months and now it's just about time to hit the track for the season ...

Renault drivers Jarno Trulli and Fernando Alonso are ready for action after a winter waiting for the new season to begin. The team and drivers have been working hard the last few months and now it's just about time to hit the track for the season opener at Melbourne, Australia. 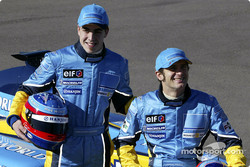 Fernando Alonso and Jarno Trulli.
Photo by Renault F1.
"Lots of things have happened this winter," said Trulli. "At Enstone and at Viry, everybody has worked hard to give us the best possible car this weekend. It's hard to believe that the R23 in the garage at the minute is the car we have been expecting for so long! I'm looking forward to getting into the car now: I arrived early in Australia in order to adapt to the time difference and be in the best possible physical shape. I can't wait now!"

Alonso is equally eager after his year away from competition as Renault test driver: "For my return to Grand Prix racing, I am looking to be better prepared than ever," he said. "I've trained hard over the winter and feel ready. I love the atmosphere in the paddock, as the tension starts to build bit by bit. Having said that, you do need to get away from it all to prepare properly mentally and focus. It's hard to believe that the start of the season is just a few hours away."

Renault will first take to the Albert Park track for Friday morning's two hour private test session, starting at 8.30am (local time). They will be joined by Minardi, Jordan and Jaguar, the three other teams that opted for Friday testing.

The car that almost propelled Minardi into extinction