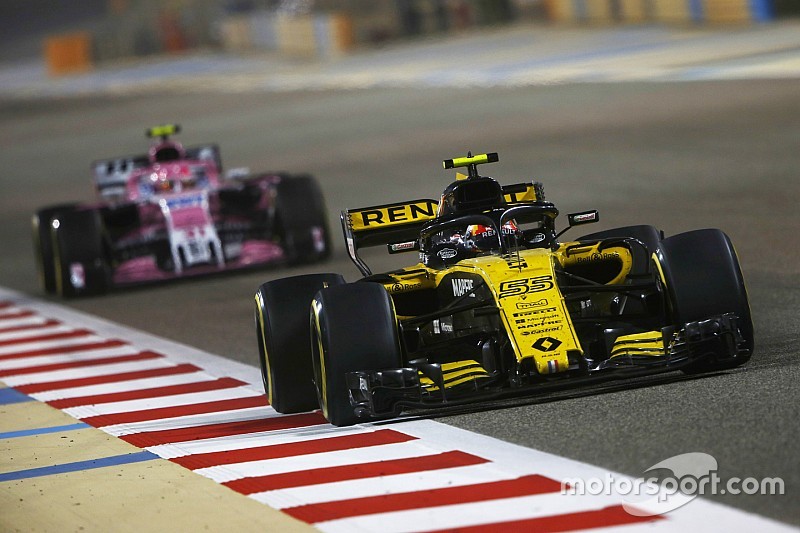 Force India has admitted its hopes of beating Renault to fourth place in the Formula 1 standings are all but over after suffering its first double retirement in almost two years in the French Grand Prix.

Renault put both cars in the points for the third successive race in France, and the Enstone-based outfit has now pulled away in fourth place in the constructors' standings on 62 points, leaving McLaren on 40, Force India on 28, and Haas catching up on 27.

Local star Esteban Ocon was eliminated at Paul Ricard after he was involved in separate first lap incidents with countrymen Romain Grosjean and Pierre Gasly, while Sergio Perez was called into the pits after engine supplier Mercedes noticed a drop in water pressure.

That was subsequently traced to a water pump leak, but there was no damage to the actual power unit as the car was stopped in time.

“I think it will be very difficult for any of the midfield teams to overtake Renault at this point. Nothing’s impossible, but they are very strong.

“Fundamentally they are doing what we were doing last year, when everyone else was taking points off each other. We had a good first half of the season with a car that probably didn’t deserve to be in the points, but was in the points on a regular basis.”

The last occasion when both Force Indias failed to finish was Austria 2016, although Perez and then teammate Nico Hulkenberg had completed sufficient laps to be classified 17th and 19th.

Prior to that the last time both cars officially retired was Hungary 2015.

“It’s disappointing really,” said Fernley. “We didn’t have a particularly good Friday, with Esteban’s spin in FP1 we lost quite a bit of track time in terms of our long run programme, and then the incident with Checo [Perez]’s lost wheel in FP2 meant both cars had to sit it out until we knew what it was.

"In FP3 it was wet, and we couldn’t get the set-up we wanted for qualifying. And then the race went from bad to worse.

"It was a little bit beyond bad luck I think. Esteban was hit by Grosjean, and then Gasly. All three Frenchmen!

"Grosjean just drove straight into him on the pit straight, and did a lot of damage to the side. It was a big hit and it was expensive in terms that we’ve lost a lot of points.

“Checo was losing water pressure, so we couldn’t take a chance. Once we knew that it was dropping it was pointless continuing, because the last thing we need to lose is an engine. It’s definitely not damaged, it’s fine.”

Strategy Report: The consequences of a mistake-ridden race