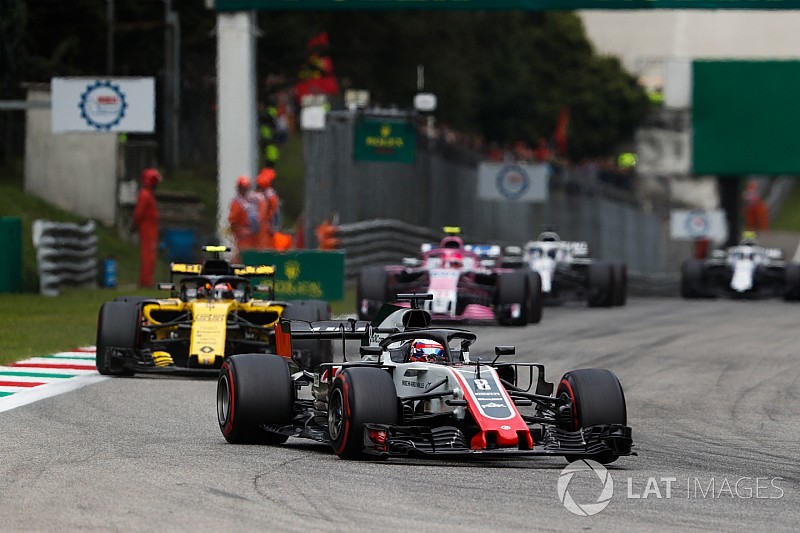 The Renault Formula 1 team has protested the Haas of Romain Grosjean following the Italian Grand Prix.

Grosjean finished sixth at Monza, a result that elevated Haas above Renault into fourth in the constructors' championship.

Renault scored two points for Carlos Sainz's ninth-place finish, but slipped behind its American rival, having been comfortably clear a few races ago.

The FIA has summoned a team representative from both teams because of a "protest by Renault Sport Formula One Team against car 8 [Grosjean]".

A Renault statement read: "We confirm that Renault Sport Formula One Team has submitted a request to the Stewards of the Event for clarification on the legality of the Haas F1 Team VF-18.

"We have no further comment on this matter until the Stewards have arrived at a decision."

F1 race director Charlie Whiting told media that the protest was over "a small detail on the leading edge of the floor" of the VF-18.

Haas came under fire earlier this season for its links to Ferrari and the design of its 2018 challenger, with McLaren and Force India suggesting the FIA should investigate.

However, no formal concern was ever lodged.

“I don’t know,” he said when asked by Motorsport.com what it was for.

“I saw the protest. It’s fine, we’ll go and listen to it and then we see what we do.

“I don’t know what they want. It has taken [us] by surprise.”