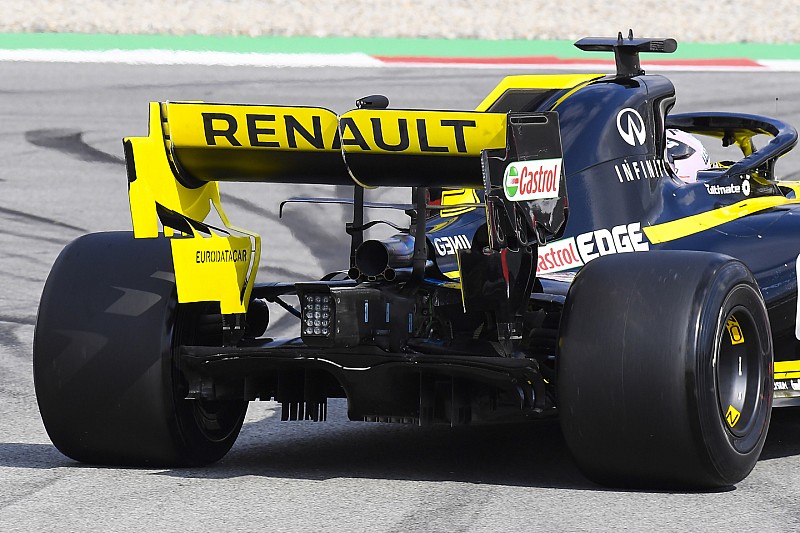 Renault says the rear wing problem that caused Daniel Ricciardo’s spin in testing this week has now been fixed.

Ricciardo was pitched off the track at Turn 1 on Tuesday when the upper rear wing element flew off his car while its DRS was open.

Analysis of the incident pinpointed a problem with the DRS mechanism, and the team elected not to use the system during Wednesday morning’s running with Nico Hulkenberg.

But with a solution having been sorted and tests confirming everything worked properly, the team allowed Ricciardo to use DRS again in the afternoon – and will continue using it as normal from now on.

Renault technical director Nick Chester said: “We had a problem with the DRS mechanism.

"It lost the link bar, and that allowed the flap to rotate. It was a fairly easy fix. We understood what the problem was and then we fixed it and we have been running DRS today.

“We did some checks on it after lunch and then ran it on the fast laps at the start of each run in the afternoon.”

Chester said that one of the factors behind the problem was that the bigger rear wings in 2019 means there is more load for the DRS to cope with.

“It is a bigger wing. More loaded,” he said. “The geometry has changed as well for the DRS because we have a different line of action now for this year. So it is a just a detail change that we needed to make.”

Beyond the wing issue, Chester said Renault had been encouraged by the early running of its RS19 but said it was far too early to judge its pace relative to the opposition.

“We are reasonably positive, but it is difficult because there are different fuel loads and engine modes, plus DRS on and DRS off,” he said. “Trying to pick it all apart is quite difficult. And for a lot of runs we don’t know what fuel people are on.

“I think we are reasonably positive, but we will get a clearer idea when we see more race runs and more qualy runs, and gradually take the differences and put it all together.

“I think there is a whole group of cars that could be quite tight, and we will learn a bit more how tight that is particularly in the next test.”