Renault’s Rob White: ‘We have had some set-backs, but we have definitely made progress’

What were the key steps taken between Jerez and Bahrain ? "We made a number of specification changes to the Energy Store (battery), involving modified hardware, requiring some gymnastics in engineering, procurement, assembly and logistics.

We also introduced two levels of PU control system software updates; the first being effectively what would have been a decent starting point for Jerez. It eliminated some bugs that allowed us to make mapping and calibration corrections, which subsequently allowed us to operate the cars in a more robust way to gather mileage.

The second layer of software changes had more functionality to allow a greater authority to the control systems, giving better performance and driveability, and a larger degree of Power Unit systems integration. All the cars started on the first route and all 4 cars migrated to the second solution as we gathered mileage.

How has the test in Bahrain gone this week? "We have had some set-backs, but we have definitely made progress and have taken several steps forward. The changes have improved the PU behaviour in the car and we are have accumulated valuable mileage. 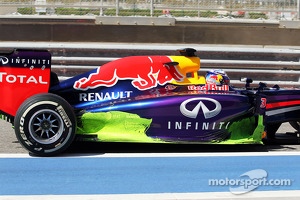 There have been stoppages, on our side and on the chassis side as well, but we have ironed out some important faults and allowed the teams to gain crucial experience of the car as a whole.

We have seen that minor incidents can cause downtime that is difficult or impossible to recover. In particular, we lost more time than anticipated on the final day.

While we are not at the level of operation and performance we would want to be, we have a more solid basis to work from, and we are moving in the right direction."

Would you say you are back on schedule? "We have made some good headway, in terms of PU performance and operation in the car, we are now in a situation we could have accepted mid-Jerez. We have solved some problems and revealed some others. We are not back on schedule but we are moving in the right direction – the running we have done is very valuable. The challenge is to improve the rate of progress, because the gap to where we wanted to be at this stage remains substantial.

We are some weeks behind where we wanted to be, and we acknowledge it will take time to unlock the full performance of the PU. We are working hard to get there and we are determined to succeed. We remain confident in the PU and its sub systems, we are just not at the level of operation and performance we want to be. The immaturity of the PU combined with the time lost to incidents, means the chassis work to prepare for the season is also behind schedule. From this point on we must pursue and accelerate an upward curve."

What is the plan in the short break between tests? "We run again in Bahrain at the end of next week. The homologation deadline is looming, the race engines for Melbourne are in the early stages of build. There is a huge amount of work in progress. The Viry team is working night and day to solve our problems.

The collaboration with our teams is closer than ever. The rate of development is extremely rapid away from the track and that we can create and validate effective solutions very quickly shows the resolve and tenacity of all our team members.

We now have a list of issues from this test we will address. There are of course priority calls to sort out the most important ones from the background noise, but we will come back stronger at the next test and continue to learn about the Power Unit and prepare for Melbourne."

Red Bull still in crisis as Mercedes streaks ahead