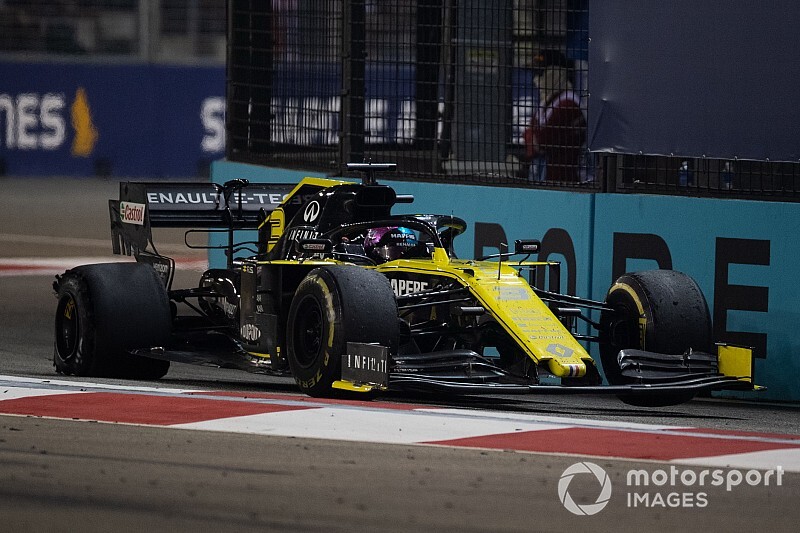 Renault admits a ninth place finish for Nico Hulkenberg in the Singapore GP was "damage limitation" in the battle with McLaren for fourth place in the championship.

The two Renault drivers had eventful races, with both Hulkenberg and Daniel Ricciardo suffering punctures after collisions with other cars.

Ricciardo started 20th after receiving a penalty and made good early progress through the field, but he fell back to an eventual 14th after he picked up a puncture in a clash with Antonio Giovinazzi.

Hulkenberg dropped to the rear of the field after collecting a puncture in first lap contact with Carlos Sainz. At one stage the German was the fastest driver on the track, until he got caught behind Romain Grosjean's Haas.

The team considered sending him to the end of the race on his hard tyres, but he pitted under the safety car and eventually finished ninth. With Lando Norris earning seventh McLaren extended its advantage by four points.

"We had more pace than that for sure, and clearly we were expecting more than that," Renault's executive director Marcin Budkowski told Motorsport.com.

"Having one car starting from 20th didn't help. Both drivers had the pace to do better, and both had punctures that forced us to stop. Neither of them was able to do the strategy that we were planning for them.

"We thought about trying to get Nico to the end, but based on his feedback and the opportunity of stopping under the safety car, we decided to stop him, and I think it was the right call.

"I think two points and damage limitation in terms of McLaren is not that bad, with Lando finishing seventh. Given the pace of the car and where we qualified we were hoping for better."

Hulkenberg admitted that he thought his race was over after his first-lap stop.

"I thought, 'Jesus, that's going to be tough'," he said. "Then obviously the good news is I had a bit of clean air for the first few laps, then went through the Williams, but then got stuck behind the Haas, which was a bit difficult to get by, I used a lot of tyre there.

"The effect behind another car is just huge here, and if you're already struggling with your tyres a bit it's almost impossible."

After his second stop, Hulkenberg took advantage of being one of the few drivers on fresh tyres in the closing laps.

"I think right at the end there was a lot of cars on older tyres, and obviously after the safety car, even if you have only 10 lap fresher tyres, that makes a difference, and the guys that were on 20-lap old tyres, they just suffered much more, they had less grip and we were able to attack them quite easily."

Ricciardo enjoyed his initial charge through the field.

"The start was definitely fun," said the Australian. "I was having a blast out there and just getting a few cars. That was good, pulling off some moves, which I didn't feel was probably that easy around here before the race.

"But I started to get a good rhythm and get some confidence. So that was going good. And then after that – the contact with Giovinazzi obviously destroyed our race.

"I didn't really feel like at the time it was his fault, didn't feel it was my fault – I just felt it was a bit of an unfortunate incident. Bit of wheelspin I think on the exit, and maybe that then slid into him. But anyway, it happens."

The soul-searching that led to Ferrari’s drastic turnaround