Renault Sport preview to the Australian Grand Prix with details on selected turns on the Albert Park circuit. 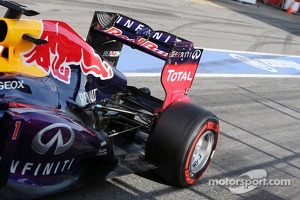 After the quick flick of turn 2, the cars build up to 300kph, but this 90° right hander is taken at 90kph so engine braking on entry is crucial. There also needs to be good engine pick-up on the exit, as this immediately leads into a quick left-right flick: if the driver misses the exit the rhythm is compromised. The fuelling at the exit of the T3 is therefore key and there must be appropriate fuel in the combustion chamber to ensure the engine can produce the power needed. It also needs to be ignited quickly so the quantity has to be completely correct.

This double corner is the fastest turn on the circuit, taken at 225kph with the speed largely carried through. After exiting turn 11 there are two quick downshifts to fifth gear, but the driver will still be very aggressive on the throttle application. This sustained momentum, coupled with the left hand turn generates g-forces of up to 3.5g through turn 11. That sort of g-force pushes everything to the right for a short duration, including fuel and lubricants. The engine still needs to respond to the driver’s demand, despite this heavy load. It needs to produce a lot of torque aggressively, but still has to be precise in its delivery to go through turn 12 and get back up to speed on the run down to turn 13.

Turns 15 and 16 are linked as an extended chicane but the tendency is to brake too late into 15, which messes up 16. Engineers will work on giving a good balance by delivering the right level of overrun support into 15; ultimately keeping the engine torque stable when the driver is off-throttle and on the brakes. If the overrun support is correct, the rear of the car is stabilized without too much push so the driver does not struggle to turn in. The exit of turn 16 is tricky as the driver is not at full throttle until fourth gear, instead dancing and hovering around in third as he tries to get the power down.

Australia will be a stern test for everyone. The average speed round the circuit is towards the top of the table, particularly the quick section at the back that requires good top end speed. The corners are however medium speed so the circuit characteristic and resultant engine requirements will be similar to Valencia, with good driveability and responsiveness through the whole rev range required. These short bursts of acceleration greatly increase fuel consumption while placing the internals under intense pressure. Albert Park actually has one of the highest consumption rates per kilometre, so the starting fuel load is one of the heaviest of the year. With the added challenge of the low grip, delivering good stability and response will really make a difference to the overall lap time.

This short winter break has actually been one of the busiest we have had in a long time. With this being the last season of the V8 engines, we are progressively migrating across to develop the V6 power unit. Naturally this puts the onus on providing a turnkey V8 service trackside and at the factory. With this in mind, we have worked hard to completely optimise our service and reliability. What we will see in 2013 is actually an evolution of the structures and changes put in place last year. This then allows us to be responsive enough to incorporate and positively influence developments throughout the year. Even with this being the final year of the V8s there are still areas to exploit and it is our aim to maximise every opportunity we have. We feel comfortable going into the season; we’ve covered a lot of miles with each of our teams and are looking forward to a positive and successful year for everyone.

McLaren and Vodafone will part ways end of 2013 season