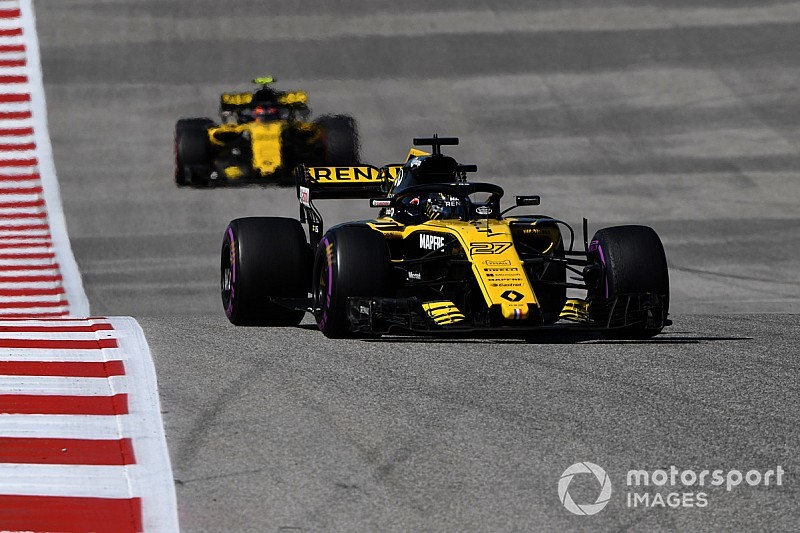 Renault Sport president Jerome Stoll says that the French manufacturer undertook an internal review after struggling in recent races, and it was that process helped it bounce back in Austin.

Renault has come under increased pressure from Haas in the battle for fourth place in the Formula 1 constructors' standings, with the exclusion of Romain Grosjean at Monza, which remains under appeal, giving it some breathing space.

Renault scored only 10 points in the first five races after the summer break, but in Austin Nico Hulkenberg and Carlos Sainz finished sixth and seventh.

The subsequent disqualification of Haas driver Kevin Magnussen from ninth place further helped to boost its advantage over Haas to 22 points with just three races remaining.

“We needed these points, definitely,” Stoll told Motorsport.com. “We had an objective for the year to be P4.

"We had, in the last two or three races, some slowdown in our performance, but now everybody is back in the race.

“The remobilisation of everyone was necessary. We had internal meetings in order to motivate everybody towards this objective, and I’m very happy that eventually delivered what we were expecting.

“Race after race we have to confirm that we are on our target. For me the objective of the year was P4.

"We were in a very good position in the first part of the season, and suddenly we realised that we had to remain mobilised, everybody, all the team, and this race has demonstrated that it’s possible to remain on the objective that we have.”

Stoll cautioned that the team cannot afford to back off as the end of the season approaches: “When you look at the differences between the teams, it’s very, very small. It was in our favour [in Austin], but we have to be carefully not to suddenly relax.

“The mobilisation is absolutely necessary for everybody until the last race. We have to remain motivated and concentrated. It’s not done. One race doesn’t make the season.”