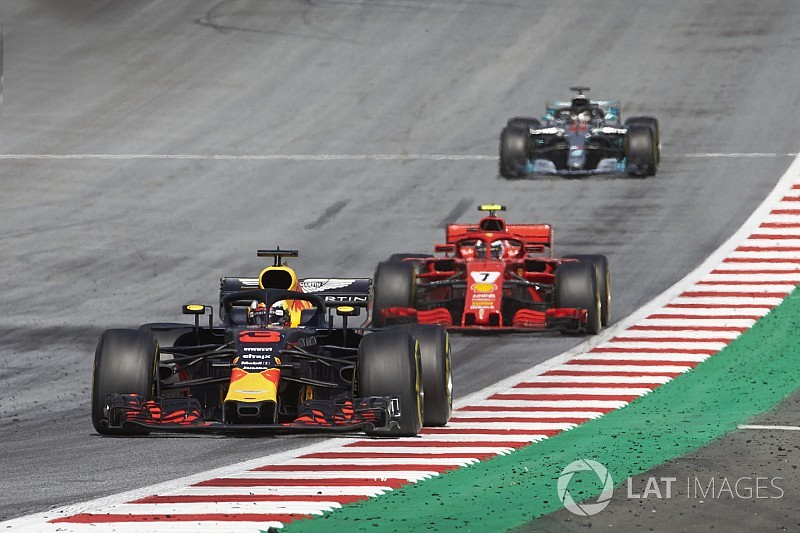 Daniel Ricciardo says Mercedes looks vulnerable in Formula 1 this season but believes it is still the toughest package to beat despite showing signs of weakness.

Mercedes swept to four straight drivers' and constructors' titles from 2014 to 2017 but has been locked in a to-and-fro fight with Ferrari this season.

Lewis Hamilton has fallen behind Sebastian Vettel in the championship, mainly because of Mercedes' double-retirement in Austria, where it had already come under fire during the race for a bad strategy call while Hamilton was leading.

That was one of several in-race decisions this season that have led to scrutiny of the championship-winning team, and Red Bull driver Ricciardo said: "They are not as dominant as they have been the last few years.

"That was inevitably going to start to mellow out at some point.

"I still think they are the overall toughest package to beat on the grid but for sure they've shown some signs of weaknesses in some areas.

"Compared to how they've been, yeah they look vulnerable, but still in the big scheme of things they are a strong team and difficult to beat."

Ricciardo was waiting to see if Mercedes might offer him an alternative to Red Bull for 2019 but now appears set to stay with the team that is yet to give him the platform for a title challenge.

Red Bull has won three of the first 10 races in 2018, but Ricciardo's success in China and Max Verstappen's victory in Austria were down to fortunate race circumstances.

Ricciardo is certain Red Bull will win more races this season but its package's lack of "real pace" means he has accepted his title chance is slim.

"I still don't think we've got the real pace every weekend to convince ourselves that we can be there [in the title fight]," said Ricciardo.

"I guess Max and myself probably take too many points away from each other - Lewis and Seb are doing all the winning there [at Mercedes and Ferrari].

"We are good enough to win more races. We need to find a little bit to be there on more tracks.

"Hopefully the ones we expect to be quick on, we are. If we come fifth and sixth in Budapest, we're probably going to be pretty pissed off."

As well as the race in Hungary, the races in Singapore and Mexico should give Red Bull opportunity to fight for victory this season.

However, Ricciardo will likely take a grid penalty in this weekend's German GP, which hurts his chances of closing the 65-point gap to Vettel.

Ricciardo has gone three races without a podium and would be closer had he not retired in Bahrain, Azerbaijan and Austria.

He said he was doing "pretty well" considering he has failed to finish three races but said "doing alright is not enough".

"The odds are against us but I still don't think it's impossible," he added. "There's still too long to go to say it's out."