Ricciardo: Losing fifth would have been a "punch in the guts"

Daniel Ricciardo reckons it would have been a "punch in the guts" for Renault if it had ended the Formula 1 season losing fifth spot in the constructors' championship. 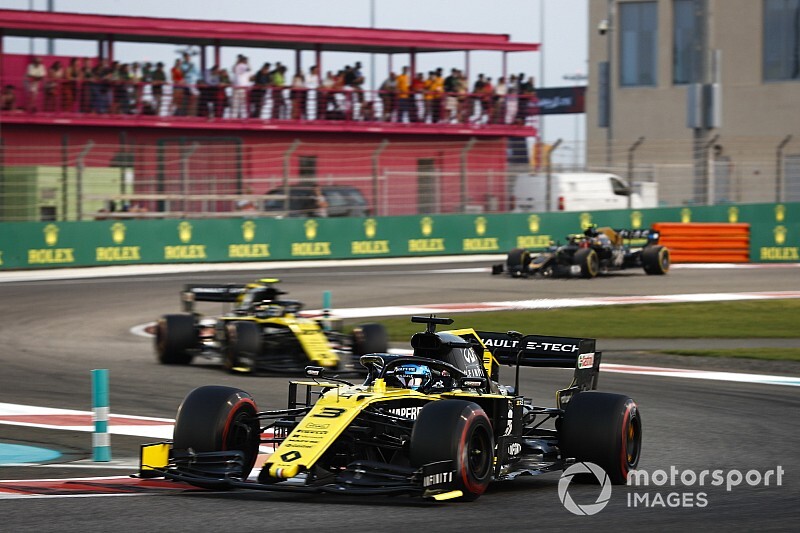 The French car manufacturer had headed into the Abu Dhabi Grand Prix needing to not give up too much ground to Toro Rosso if it was going to keep hold on to its spot in the standings.

And although Toro Rosso's Daniil Kvyat did finish ahead of both Renaults, it was not enough to lift his Italian outfit in front.

Ricciardo, who came home two places behind Kvyat in 11th, thinks it important that, on the back of what has been a roller-coaster season for Renault, the year did not end with another disappointment.

"I think that would have been definitely a punch in the guts," he said, when asked by Motorsport.com about the importance of achieving its weekend target.

"I know financially it is [a blow]. And you put the financial loss on to kind of motivation loss, and we didn't need that.

"So let's use that as a positive and say: "Alright boys, we dodged a bullet now. Let's avoid all bullets next year and f**k some s**t up!"

Although Renault had looked in contention for a good points haul in the Abu Dhabi race, Ricciardo said it all went wrong when he switched to the hard tyre.

"The hard tyre killed my race," he said. "You know, we didn't have speed on it at all. And it's one of those ones as a driver that you know straight away.

"We do test sometimes for five or seven laps, but you need an out lap to know how the car is going to be and I felt it already by Turn 8. I think it was on the out lap of the hard.

"My gut told me that this is going to be a pretty shitty stint, but I didn't say it on the radio straight away. I didn't want to be negative from the first lap. But after a few laps I said, 'Boys, we're not going anywhere.' So eventually we did a two-stop. The soft was a ton better, but I guess too little too late."

Ricciardo said that getting to the bottom of why the hard did not work was something he and Renault needed to understand before they disappeared for the winter break.

"I don't want to let it go," he said. "I want to figure out why the hard didn't work for us and actually, more importantly, why we put the hard on. It wasn't our first plan in the strategy.

"But [then] we'll get a break. I think it's important now just in the winter to keep the spirit of the team high.

"We did underachieve for the most part this year, but we must not let that bring them down. I think if that's the case, then we're not going to move forward next year. So we'll keep the candle wick lit!"