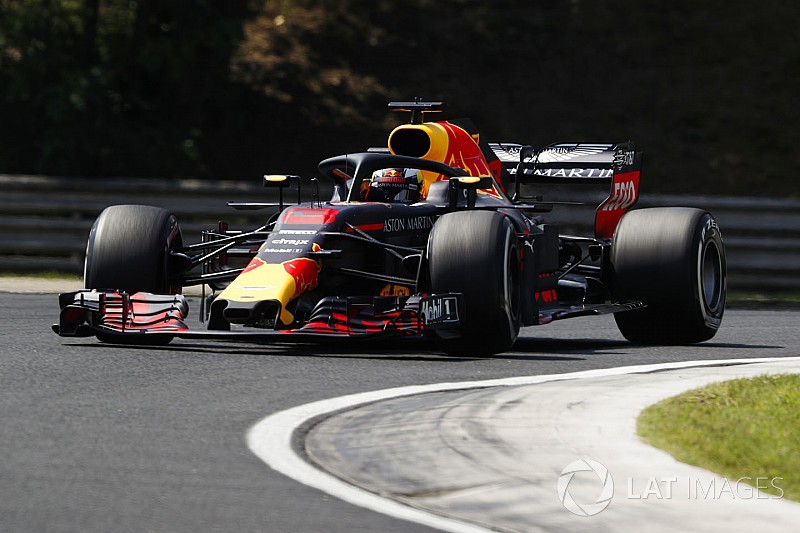 Daniel Ricciardo believes Red Bull cannot afford to qualify on the third row for the Hungarian Grand Prix if it wants to capitalise on its victory shot this weekend.

Ricciardo topped the opening practice session at the Hungaroring before ending FP2 third-fastest, behind teammate Max Verstappen and the pace-setting Ferrari of Sebastian Vettel.

Verstappen was just 0.074s slower than Vettel and though Ricciardo, who is using an older-specification Renault engine, was a couple of tenths off the pace, he believes Red Bull can overcome its usual qualifying deficit this weekend.

“Mercedes will find more on one lap, Ferrari already seem fast,” said Ricciardo. “They are probably the target everyone’s trying to chase.

“Over one lap we didn’t execute it perfectly so I’m confident there’s a few tenths in the package.

“I think even with a good race car, the first row is the one I want to qualify on, no doubt.

“Second row wouldn’t be a disaster. [But] we don’t want to be on the third row.”

Verstappen said the difficulty of overtaking in Hungary meant “you have to put everything on qualifying”.

Ricciardo believes “if we’re the quicker car we’ll find a way” but said it would be “a difficult race” if Red Bull starts from row three.

“We don’t want to make too much work for ourselves,” said the Australian. “Tomorrow’s an important day. Front row’s the objective, top two rows we can still manage.

“On one lap, we’re there – it didn’t quite show it on the lap times, Seb got ahead of both of us. There’s still more in that.

“If we can execute a good lap tomorrow I think we can still be there, close enough. I’d love to say pole but I’d take a top three.

“With a faster car [in the race], we can win from there.”

While Ferrari and Red Bull lapped closely at the top of the leaderboard, the two Mercedes drivers were cut adrift in fifth and sixth place.

The Hungaroring is one of Mercedes’ most vulnerable circuits, but Verstappen thinks Lewis Hamilton and Valtteri Bottas, who ended Friday 0.753s and 1.034s off the pace respectively, will make a significant gain on Saturday.

“They couldn’t get a lap together on the ultras, they both went a bit wide in the middle [sector],” said Verstappen.

“I am expecting them to be there tomorrow.”

He added: “We look competitive of course with our car, but if it's going to be enough to compensate that from the straightline losses here, I'm not sure.”