Ricciardo: Spa a boost for Renault despite no points 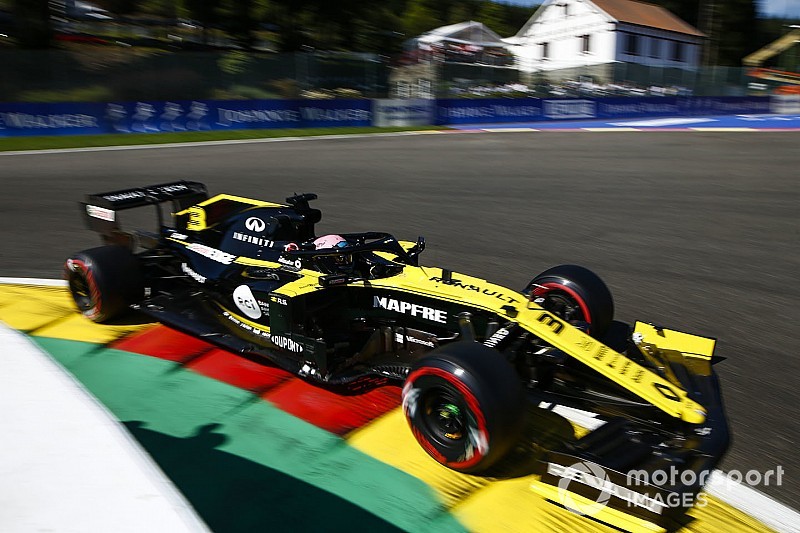 Daniel Ricciardo says Renault should feel boosted by its speed at the Belgian Grand Prix, even though it failed to take home a decent haul of points.

The Australian's own hopes of a top 10 finish were dashed at the exit of the first corner when he was hit by Lance Stroll's Racing Point, badly damaging the right side of his car and leaving him lacking downforce for the rest of the race as he came home 14th.

And although teammate Nico Hulkenberg managed to take eighth place, Ricciardo is well aware that the whole weekend could have been better - especially if the outfit had not take grid penalties for fresh engines.

Asked by Motorsport.com how he judged the performance of Renault in Belgium, Ricciardo said: "It was promising - and I think even in the race, with such a damaged car, we held on pretty well.

"From the weekend itself, I think it was a very very strong weekend for us on pace. And coming into some of these other more low-downforce circuits, like Monza and that, I think it's promising.

"So we've just got to keep it rolling. Obviously we've missed out on double points, I think we definitely could've got a good handful, but we'll move on."

Ricciardo revealed that the lack of downforce he suffered after being hit by Stroll made his car feel 'wonky', and made going through the Eau Rouge corner each lap very tricky.

"All the right side of the car, the floor, was pretty much missing" he said. "I wouldn't say it was damaged, it was non-existent any more.

"I reported it as soon as it happened and I remember going through Eau Rouge and the car was very wonky, to be polite. So I came in the pits.

"I thought maybe we're going to retire the car because I suspected there was lot of damage, and then we put the mediums on and went out there, and even though it was a handful, it didn't seem the pace of the others was that strong.

"So I think we were like 'well let's just keep going and see what happens', and I think we held on to seventh for a while. I couldn't really believe it, but I was like 'maybe we're going to get some points out of this'.

"Eau Rouge is pretty easy full these days in these cars, but every lap through there if I was full I was holding my breath and otherwise I was lifting. It was a handful. But yeah, I was pretty proud actually we held on for that long, but at the end we couldn't obviously do any more."