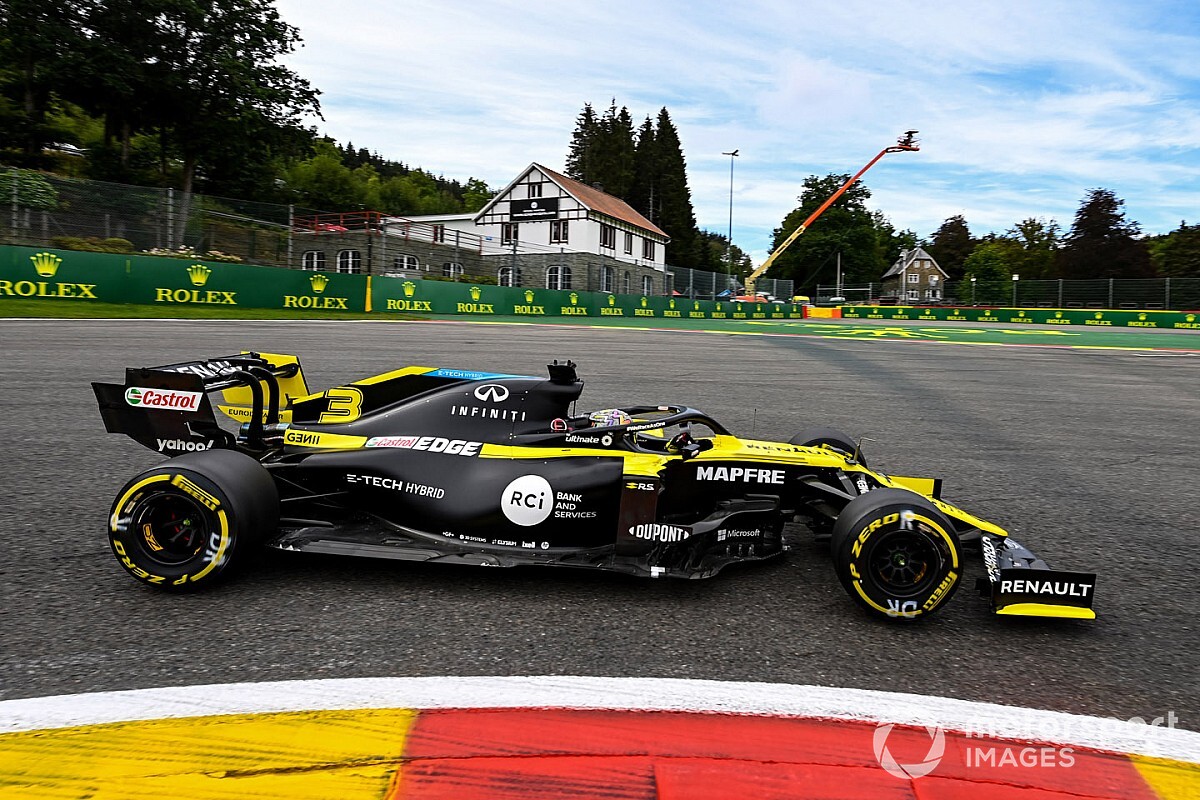 Renault F1 boss Cyril Abiteboul says Daniel Ricciardo's engine and gearbox are unharmed after a hydraulic failure stopped the Australian's car on track in second practice for the Belgian GP.

Ricciardo stopped on track with some 15 minutes left on the clock and marshals had to push his car behind the barriers.

Prior to the issue, Ricciardo set what would stand as the second fastest time in the session, behind only Red Bull's Max Verstappen. He also logged the best sector time in S3, while his team mate Esteban Ocon was fastest in S1.

Abiteboul cautioned that it's still early in the Belgian GP weekend, but he conceded that it was a promising start for the Enstone outfit.

"What happens on Friday isn't always representative of Saturday and Sunday, and it's Sunday that matters," Abiteboul told Sky F1. "We see that the car has made some progress, except for Barcelona, where we were not quite able to get the set-up, but also in terms of overall aerodynamic performance competitiveness. At a low downforce track, a bit like Silverstone, but even a different extreme here, we feel good.

"We feel that the engine is working well. Obviously there is the disappointment of the run that was cut short because of the hydraulic problem, but as far as I understand no damage to the gearbox, which was new, or to the engine, which is what matters.

"The car was going to stop anyway when you lose hydraulic pressure, but we understand no damage was done to the engine."

Abiteboul conceded that the cars were running a low-downforce levels – a policy that might be compromised because of the threat of rain later in the weekend.

"Here it's basically as low as you dare and can cope with. The weather is going to be interesting, because you also need to factor into the choice we'll be making this evening what it looks like on Saturday and Sunday.

"I think in general we are on the lower end of the spectrum in terms of downforce production here. Daniel can cope with it fairly well, I think Esteban is also learning to work around the limitations of the car.

"Esteban has a fresh engine also here, which means a bit more kilowatts, which matters quite a lot here. So it will be interesting to see the dynamic unfold."

Regarding the competition, he added: "I think you have a midfield that is so tight that the characteristics of the car, engine, downforce, drag and so forth, will have an impact on the competitiveness of the weekend.

"I think we have to try to work to improve on the weaknesses. In general we have a car which is a bit more competitive than the midfield on low downforce tracks, so hopefully it's going to play for us this weekend and next weekend in Monza."

Hamilton feels Red Bull has the edge over Mercedes at Spa