For once championship rivals Michael Schumacher and Juan Pablo Montoya agree on something; neither wants to see a reduction of speed in Formula One. The FIA intends to look at ways of slowing F1 cars down as every year lap times get faster and ...

For once championship rivals Michael Schumacher and Juan Pablo Montoya agree on something; neither wants to see a reduction of speed in Formula One. The FIA intends to look at ways of slowing F1 cars down as every year lap times get faster and faster. Some drivers believe F1 is simply too fast to be safe any more but the Ferrari and Williams opponents do not agree with that opinion. 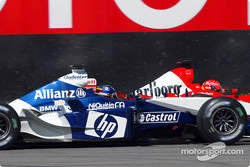 "It is probably a matter of whether we arrive at a limit where we can cope with it or still can cope with it and from a drivers' point of view it is clear that we can still cope with the speeds we do," said the reigning champion.

Montoya, as usual, was somewhat less diplomatic and more to the point: "I think it's crazy," he exclaimed. "Formula One is a risky sport, it's part of it and you have to deal with it. What do you want to do, put an ejector button in the car?

"Right now, I want to go quicker, not slower. You do get used to the speed of the car and if somebody feels they can't drive it then they shouldn't be here."

Schumacher conceded the subject needs consideration: "I think for the future if you see development going there has to be a direction and there is something in plan to do," he added. "If you see the relationship between the horsepower and what the tyres do and the aerodynamics are, then we have, in my view, to look at that and reduce the horsepower."

Montoya's opinion was much the same; if there has to be a reduction in speed, he would rather sacrifice power than grip. "If something needs to be done then they should cut power because I don't want less grip on the tyres," he commented.