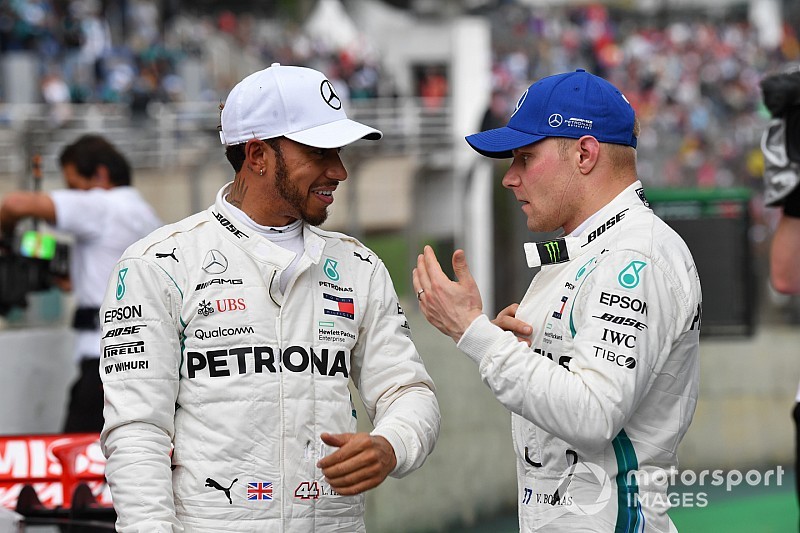 Nico Rosberg believes Valtteri Bottas is better than he showed in Formula 1 last season and has backed him to be "annoying" Lewis Hamilton "quite a lot" in 2019.

Rosberg beat Hamilton to the 2016 world championship when they were teammates at Mercedes and then announced his shock retirement at the end of the year.

Mercedes signed Bottas to replace him but a solid first season, in which he won three grands prix, was followed up by a winless 2018 campaign.

Sky F1 pundit Rosberg, speaking at a day of promotional filming for the channel, believes the start of the year will be crucial to Bottas.

"With a new season starting again he has a good chance of establishing himself in a much stronger position and even really [be] annoying Lewis quite a lot.

"I think that's possible. It always depends how the season starts.

"Last year he had a lot of bad luck as well. If the luck is on his side and he starts well, it could be a whole different situation."

Bottas did help Mercedes to a fifth straight constructors' championship, while Hamilton claimed 11 victories to wrap up his fifth drivers' title.

Rosberg said F1 does not need his former team to fall back, but for others to catch up.

"It's been an amazing run but it's not necessarily time for change, it's time for renewed battles up front, and then may the best team win," he said.

"Mercedes has been the best recently. We want it to go down to the wire, we want to see real action."

Ferrari and Sebastian Vettel mounted a stronger title challenge against Mercedes last year but fell short thanks to errors from both parties.

Red Bull also became a regular victory threat at the end of the year and Rosberg said F1 would "love" to see Max Verstappen's team, which has switched to Honda engines for 2019, "up front and make it a three-way fight, at least".

"That would be so cool," he added. "I hope that can work out for this year.

"There's a real possibility because the regulations have changed so much in terms of the cars, and everybody had to start from scratch."

Rosberg will be joined at Sky this season by 2009 world champion Jenson Button, who will take on his first full-time pundit role.

Speaking at the same event as Rosberg, Button also backed the front-wing and aerodynamic changes for 2019 to close up the field.

"Lewis is coming off a fantastic few years but with the new regulation changes who knows what is going to happen in 2019," Button told Sky Sports News.

"There's so many changes and it's exactly what the sport needs. I think we might have three teams fighting at the front as well, hopefully we're going to see Red Bull-Honda up there.

"If we do, there'll be some fantastic fights I'm sure."

Has Red Bull fallen into the McLaren-Honda trap?