May 2 (GMM) F1's newest winner has admitted he has no plans to leave his team. 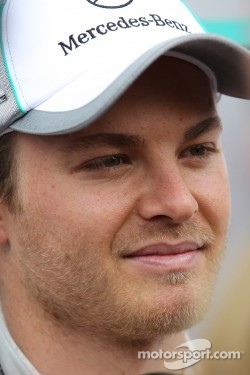 After more than a century of Grands Prix, Nico Rosberg finally broke through with his first race win recently in China.

Although pressed harder than in recent seasons by his famous teammate Michael Schumacher in 2012, the German has a comfortable position at Mercedes.

The 26-year-old told Sport Bild he might stay put for the rest of his career.

"Forever in silver? Why not?" he is quoted as saying.

Rosberg said he is in a "great position" to lead the famous German marque to the world championship.

"My big goal is to be world champion with the Silberpfeil (Silver Arrow)," he insisted. "It occurs to me that it would taste even better than to win with Ferrari."

Rosberg said he wouldn't even mind sharing the team with Sebastian Vettel, F1's back-to-back reigning champion who has expressed interest in racing one day for a great marque like Mercedes or Ferrari.

"I don't mind, it could be anyone -- Sebastian, whoever. I don't see any problem with that," said Rosberg.

He said his first choice as teammate is Schumacher.

"I think it would be great if he stays," said Rosberg, referring to the 43-year-old's expiring contract. "He is at an extremely high level right now.

"I can well imagine that Michael will extend."

Grosjean and Kobayashi equally fast on day 2 at Mugello