© 2021 Motorsport Network. All rights reserved.
TV Tickets Fashion Giorgio Piola Jobs
Previous / Bahrain test: Performance of P Zero tyres in line with expectations Next / Renault’s Rob White: ‘We have had some set-backs, but we have definitely made progress’
Formula 1 Testing report

On the eighth day of winter testing Mercedes’ Nico Rosberg finally finished a session top of the timesheet. Given Mercedes’ excellent start to the year and the fact Rosberg leads the field in laps completed, that statistic will come as a surprise to many. He underlined his and Mercedes fine form by also completing the most laps of any driver on day four at the Bahrain International Circuit. On days two and three teams had pushed past the 100-lap mark but the final session of the first Bahrain test was a more stop-start affair with frequent red flags and many teams suffering technical hitches.

Twelve drivers appeared for the 11 teams as the first Bahrain test drew to its conclusion. Continuing from day three were Jenson Button for McLaren, Kimi Räikkönen for Ferrari, Pastor Maldonado in the Lotus, Sergio Pérez for Force India and Daniel Ricciardo at Red Bull Racing. Mercedes, Toro Rosso and Marussia alternated their drivers with Rosberg, Jean-Eric Vergne and Jules Bianchi respectively stepping back into the seat after a day off. Adrian Sutil returned for Sauber after sitting out days two and three.

“We can be very pleased with the first test in Bahrain this week. We completed a lot of mileage and learnt more about the car with every lap we achieved."
Nico Rosberg 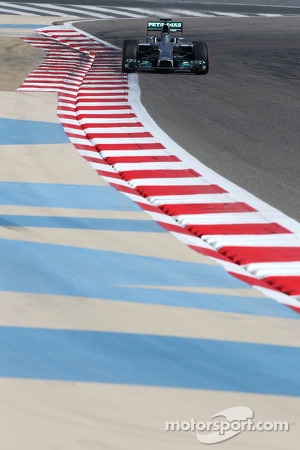 Williams gave test and reserve driver Felipe Nasr a first run in the FW36. The team had formally confirmed the Brazilian’s signing overnight, ahead of his debut this morning, while Caterham elected to continue with Marcus Ericsson in the morning before swapping back to Kamui Kobayashi for the afternoon.

It was Ericsson who completed the first timed lap of the day with a time of 1:45.094, 20 minutes after the pitlane went green. It was to be his only timed lap of the day as he ground to a halt with a smoking CT04 on his next pass, red flagging the session. The car was recovered and Caterham mechanics immediately began to disassemble it. When running resumed Vergne went to the top of the timesheet with 1:41.784 where he stayed for 15 minutes before being deposed by Nasr. The 21-year old Brazilian got his debut off to a good start with a time of 1:40.026. Over the course of the day he would knock three seconds off that on his way to completing a very solid 471km.

Nasr’s time in P1 was shortlived as Rosberg was now on track and, one hour into the session, dropped the benchmark first to 1:36.237 and then 20 minutes later to 1:34.810. Shortly afterwards he caused the second red flag of the day, coasting to a stop following a stall after a practice start. With the W05 swiftly recovered it did not take long for the track to go green again and Rosberg was straight back out with another fastest lap, beating the best of the week so far with a lap of 1:33.662, the first driver into the 1m33s. 20 minutes later and two-and-a-half hours into the session he beat it again with  1:33.283 as Mercedes continued with qualifying simulations. That remained the best lap of the day but, perhaps more significantly, was within a second of Rosberg’s own pole position time from the 2013 Bahrain Grand Prix. Sebastian Vettel’s fastest lap of the race had been beaten on the first day of the test.

The next stoppage came at 1135 when Pérez, who looked on course to move to the top of the leaderboard himself, ground to a halt with what was believed to be a gearbox issue. The VJM07 did not appear again. The session ran uninterrupted after the restart until the middle of the afternoon when a brief halt was called to allow marshals to replace a missing bollard.

“There’s no point in making negative comments, because everyone knows we are facing major problems and we are not alone in that."
Jean-Eric Vergne

At that point the gap was noticeable between those teams that were getting through their programme and those that were chasing problems in the garage. Mercedes, Williams and Ferrari were all past 50 laps, McLaren were closing in on it fast. Lotus had a disjoined morning but were next best with 32 laps on the board. The previous evening the team from Enstone had announced they were awaiting parts to be shipping from England and might be late onto track, though in the final analysis they were out only 90 minutes after the scheduled start. 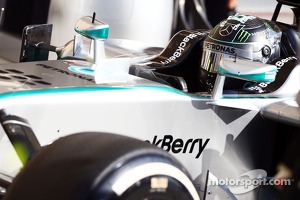 Behind them came the non-runners: Force India halted on 19 laps, Red Bull on 15, Toro Rosso on six, the disassembled Caterham with four and Marussia on two. Adrian Sutil had not appeared at all after Sauber elected to change their chassis – he would, however, get out later on in the afternoon. Marussia were also working on a comprehensive rebuild and they appeared again only a few minutes before the end of running. Caterham had diagnosed electrical problems and were able to give Kobayashi 17 laps later in the afternoon and Vergne was able to increase his total to 19 before the end of the day.

“There’s no point in making negative comments, because everyone knows we are facing major problems and we are not alone in that,” said the phlegmatic Frenchman afterwards. “We knew when we came to Bahrain that there had not been enough time since the previous test to have solved all our issues. On the positive side, we have managed to fix some of them now. Also, even if I have not done so many laps, it’s clear from those I have managed to complete, that Toro Rosso has done a good job to give me a car that feels nice to drive.”

The big story was, of course, Red Bull’s ongoing travails. Ricciardo had been late to run in the mronign  had not appeared since lunchtime and would not do so again. The team left race engineering co-ordinator Andy Damerum to explain the situation. “On Daniel's install we noticed a software problem and that knocked us back for the morning. We got out again around lunchtime and put in a 10-lap run but we had to abort that as we had another mechanical issue. We brought Daniel back in and discovered some damage on the car, which, following investigation, was worse than we imagined.”

Three more red flags late in the day interrupted those teams hoping to complete long runs. First Rosberg, with an hour remaining, then Sutil as the Sauber made it’s first appearance of the day, and finally Räikkönen, who spun and hit the wall at Turn Four, causing the day – and the test – to end five minutes ahead of schedule.

Despite missing the final hour, Rosberg professed himself very satisfied with Mercedes progress through the day and across the first week of testing in the Gulf. “We can be very pleased with the first test in Bahrain this week,” he said. “We completed a lot of mileage and learnt more about the car with every lap we achieved. This morning we were able to try some qualifying practice runs which felt good, meaning I could attack the lap a bit as I found a good balance. Later in the day we did a race simulation, which was crucial to learn all the new things in the car. There was a lot of feedback from the engineers, so my head was full of information!

“We suffered with an issue at the end of the day which ended our programme slightly early. There is still some way to go for us to manage the reliability before Melbourne as this will play a huge factor in the early races, but we're hopeful that we can make another step towards achieving this next week.”

With two-thirds of the winter programme completed, the final four-day test will begin on Thursday, again at the Bahrain International Circuit.

Renault’s Rob White: ‘We have had some set-backs, but we have definitely made progress’

Leclerc: Ferrari can’t expect to fight Mercedes at other 2021 races