Nov.14 (GMM) According to Nico Rosberg, a current Formula One driver smokes cigarettes.

The conversation of smoking come up when Rosberg was recalling the last time F1 visited Texas. 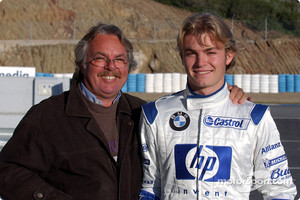 "Yes," Rosberg told Italy's La Stampa, "it was 40 degrees and while the other drivers wore refrigerated suits, he (Keke) was bare-chested in the sun, smoking a cigarette.

"He had beaten them all before it started," Nico smiled.

The La Stampa newspaper said the behaviour of Rosberg's father almost 30 years ago would today be "unthinkable". Indeed, it was believed the last smokers in F1 were Jan Magnussen at the end of the 90s, or perhaps Mika Salo.

"About the smoking?" Rosberg wondered. "No, you're wrong -- there's one driver who lights one cigarette after another.