Rubens, Ralf get off with a warning

After the first corner pile up at the Australian Grand Prix both Ralf Schumacher and Rubens Barrichello were called before race organisers to give their explanations. No penalties will be put on either driver it has been confirmed, but both will be ...

After the first corner pile up at the Australian Grand Prix both Ralf Schumacher and Rubens Barrichello were called before race organisers to give their explanations. No penalties will be put on either driver it has been confirmed, but both will be briefed before the Malaysian Grand Prix next weekend. 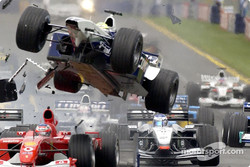 First corner accident: Ralf Schumacher flying over Rubens Barrichello.
Photo by Ferrari Media Center.
Schumacher launched off the rear end of Barrichello's Ferrari at the first corner of the race, an accident that resulted in nine cars being taken out.

"The stewards looked at the incident from every possible angle with many different videos and decided it was a legitimate manoeuvre in that when he (Barrichello) moves to the left in front of Ralf Schumacher he was taking his line for the corner," said FIA President Max Mosley.

"We ourselves have a right of appeal from the stewards and I considered the matter with (FIA Race Director) Charlie Whiting whether we should take it further. In the end we decided it was marginal and Charlie is going to talk to the drivers in Malaysia."

Barrichello and Ralf Schumacher have a history of collisions; last year Barrichello twice took Schumacher out of contention in accidents that both blame on each other, much the same as this latest one where they are saying was each other's fault.