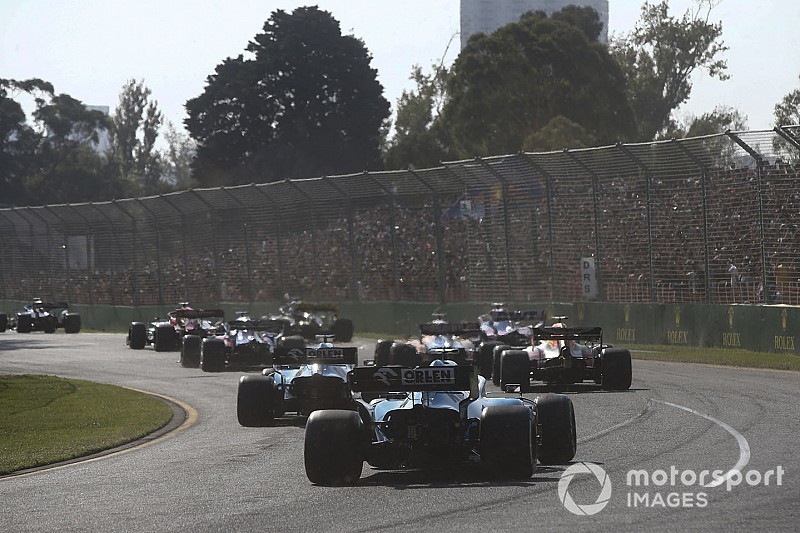 Williams rookie George Russell was only able to see the start lights on his Formula 1 debut by looking at a reflection from windows by the side of the track.

The FIA is working on a solution after complaints following the Australian Grand Prix that the higher 2019 rear wings blocked some drivers' view of the start lights.

Russell, who started at the back of the grid in Melbourne, said it caused him to have a "terrible" start.

"I pulled up onto the grid, looked up and realised I couldn't see anything and I kind of shat my pants," he admitted.

"I was looking all around and I ended up seeing the lights through the reflection of the Paddock Club [F1 hospitality] windows.

"I was sat looking, with my head at a 45-degree angle and my start was terrible because I was looking around for a couple of seconds, where to go, then realised it was the fifth light and realised my hand was in the wrong position."

Russell's teammate Robert Kubica was among those to complain about the view of the gantry in Melbourne.

The wings are 70mm taller, partly influenced by a push to lift the rear wing endplates from blocking what drivers could see in their rear view mirrors, and 100mm wider as part of the aerodynamic changes made to help improve overtaking.

It is not known what solution will be implemented for this weekend's Bahrain race, although one mooted answer was an extra set of lights halfway down the grid.

Russell said he was not sure if it would be a problem everywhere, although start lights are placed at a standard height at each circuit.

"At the back of the grid [in Melbourne] the track dips down very slightly so the rear wing of the car ahead would seem higher," he said.

"I'm not sure if it'll be an issue at all tracks, but we'll find out on Sunday and we'll probably be in a similar sort of position [at the back of the grid] and we'll see."

Ticktum to drive for Red Bull in Bahrain test

Kubica: Shortage of spares "complicating our life" in Bahrain