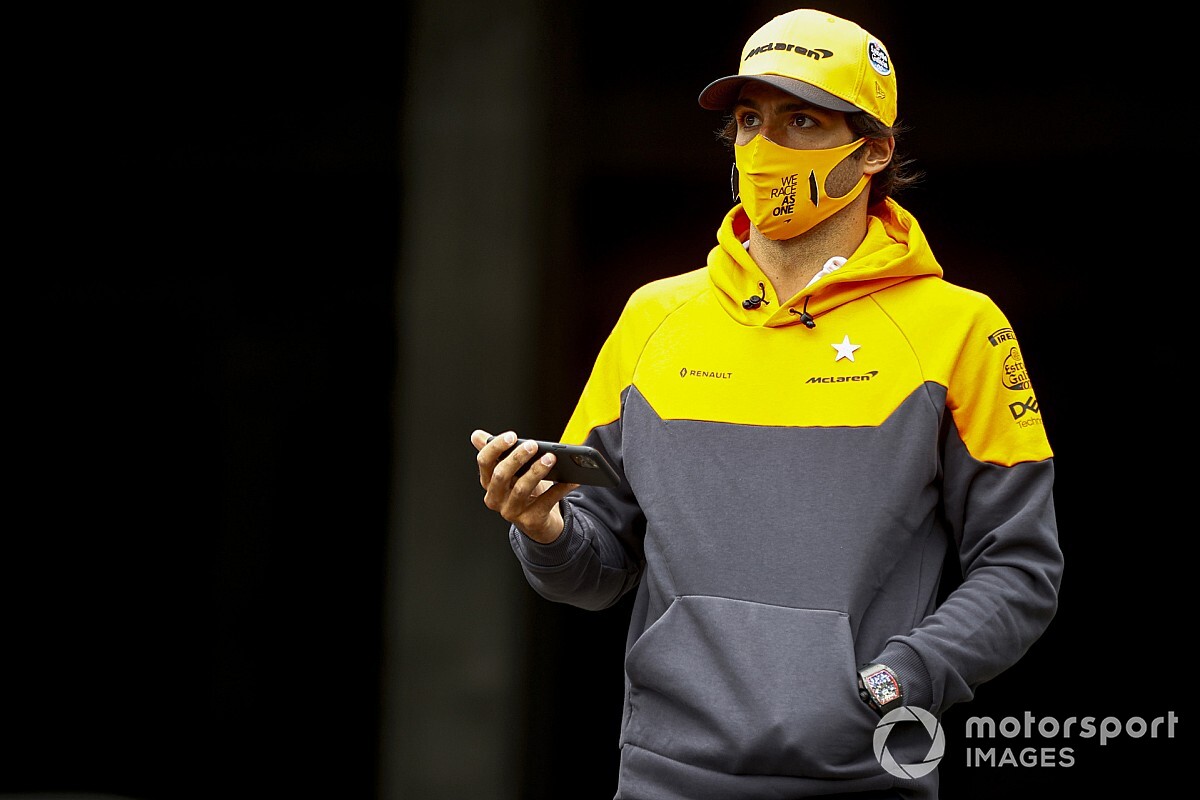 Carlos Sainz says he is upset by his run of bad luck this season, as he admits the points lost through no fault of his own is starting to "hurt".

The Spaniard's troubled campaign continued at the Belgian Grand Prix last weekend where a problem with his Renault engine triggered an exhaust failure before the start.

With Sainz having seen other good race opportunities taken away from him through bad pitstops, and a mysterious cooling problem that prompted a chassis change, he has expressed some frustration at the situation.

He is currently 22 points behind teammate Lando Norris in the drivers' championship, but reckons he would be ahead of the Briton if things had gone his way.

"Unfortunately it looks like everything is happening to me in these first seven races," said Sainz, when asked by Motorsport.com about how the bad luck was affecting him.

"It's starting to get actually a bit difficult. Last year I had two to three races with bad luck or things not going your way, which, as long as it is not your fault, you can digest it pretty quickly.

"But this year, seven races, there's little actually that has gone right for me apart from I think the first race in Austria, and Barcelona.

"At all the other races I have had an issue, I had a problem. And I've lost out at least 30 points this year in the championship which starts to hurt quite a lot. It starts to honestly affect me.

"I'm getting a bit upset by it. But at least it hasn't been my fault and I just need to keep digging and need to keep working the same way."

Sainz said that he and the team were working hard to try to turn things around, and said there had been a response to some of the problems he had faced.

"I think there's definitely things we can do better and we are doing better already," he said.

"Like, for example, I had three very slow pit stops in the first four or five races. It looks like we are improving that.

"So that is something that the team has been working very hard and the mechanics and everyone have done a much better job over the last two or three races.

"But obviously, I got the bad luck of being affected by them. But on the other hand, there's the PU issue in Spa and a couple more PU issues that I had before Spa that have been holding me back a bit which has definitely been quite unfortunate."

Sainz is set to re-use the Renault power unit that caused his troubles in Belgium for Friday practice at the Italian GP to evaluate whether or not it has been compromised.

"We know the PU is alive at the moment I'm gonna run it [on Friday]," said Sainz. "Let's hope it runs safely and nothing happens and we can start from there with the same engine that I've been racing the last couple of weekends."

McLaren said that a sensor issue triggered the exhaust failure on Sainz's car at Spa that prevented him from starting the Belgian Grand Prix.

Sainz was forced to return to the garage before the race after reporting an issue en route to the grid, which ultimately forced him to miss the race.

Team principal Andreas Seidl confirmed that Renault's analysis into the failure showed a sensor issue had sparked the problem, and has put countermeasures in place ahead of the Monza weekend.

"There was a sensor issue within the engine which then triggered an engine mode outside of the normal operating conditions, which was finally causing explosions in the exhaust, which destroyed the exhaust," Seidl explained.

"At the moment, it looks like the engine is still OK. We will start the weekend with this engine today, and try to establish if we can keep using it.

"Renault said they have measures in place that this doesn't happen again, so that's what we need to check today."