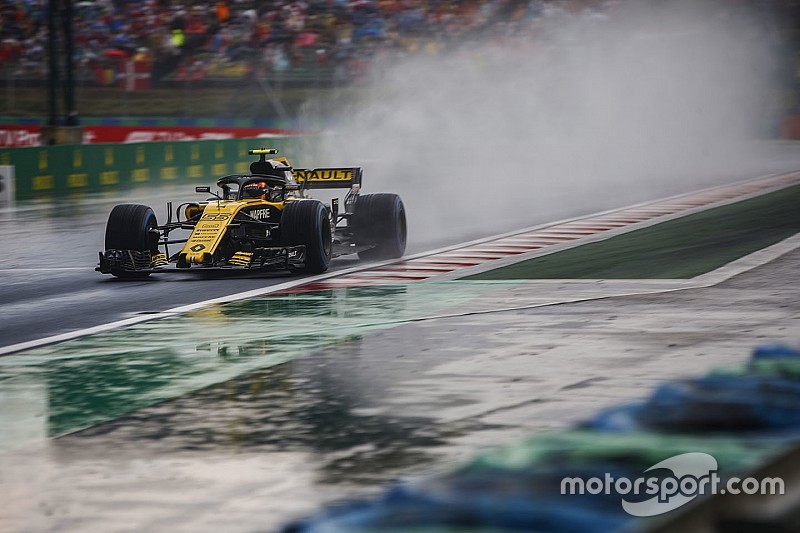 Carlos Sainz Jr defied a call from his Renault Formula 1 team to pit during Hungarian Grand Prix qualifying to complete the lap that earned him a fifth-place start.

Sainz’s effort in the wet on Saturday earned him his best qualifying result with Renault and matched his career best grid slot in F1.

He claimed Renault told him to pit during his fifth lap in Q3, which would have been in line with or one lap later than other drivers, but the Spaniard continued and posted a 1m36.743s that briefly put him third.

Sainz stayed out for another flying lap as well as he did not have time to pit for new wet tyres and though he failed to improve his laptime, he was only jumped by Valtteri Bottas’s Mercedes and Sebastian Vettel’s Ferrari.

“The moment they told me to pit, I was on my hot lap for third,” said Sainz, who will start ahead of Pierre Gasly’s Toro Rosso and the Red Bull of Max Verstappen

“I decided to finish the hot lap and wish that the tyre would hold on until the end of the session.

“With a bit drier track like it was at the end of the session, with a newer set of tyres, who knows what would have happened.

“But in equal conditions, until everyone put the new set on, I was P3, and I will save that for me.”

Sainz is yet to establish where he will be driving next season because he is currently on loan from Red Bull to Renault, and is likely to have no option at his current employer’s senior team in 2019.

His place at Renault is under threat because Esteban Ocon could join the team on loan from Mercedes.

Asked by Motorsport.com if the result had come at an important time for him, Sainz replied: “It's very important.

“Obviously we need to finish it off , but even if something weird happens to me I will be very proud of what we have achieved today.

“As you say it comes at an important moment.

“The team, the engineers, the mechanics are trusting me a lot and they were really, really happy for me.”

Sainz’s teammate Nico Hulkenberg was knocked out in Q2 because a problem with the team’s fuel bowser meant he was unable to hit the track at the beginning of the session.

Hulkenberg tried to complete a lap on slicks but rain began falling heavily on his outlap, and as conditions deteriorated he was only able to manage 13th as that delay meant he missed the best of the conditions on intermediates.

“Of course it’s disappointing and it’s a missed opportunity,” he said.

“Usually if you’re not in the top 10 you have at least the side advantage that you can offset the strategy or start on a different tyre, but that’s also taken away now [because of the rain in Q2].”

Ricciardo "needs time away" from F1 after recent struggles