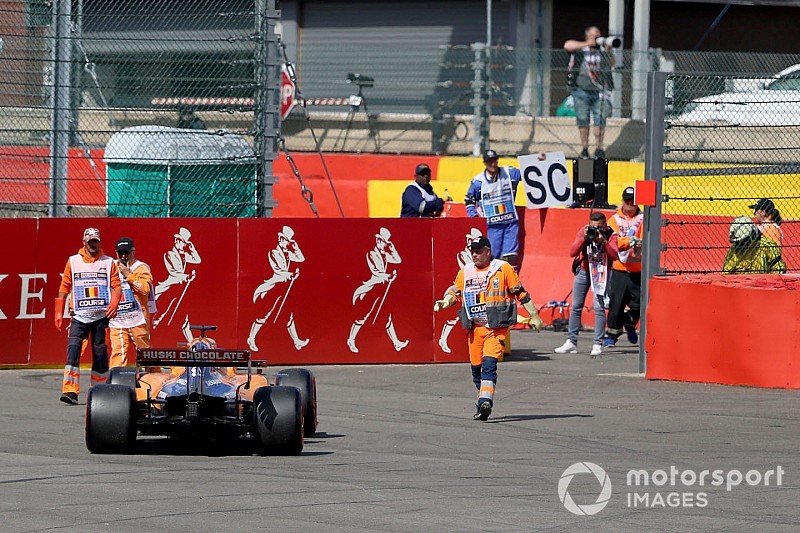 Sainz suffered a loss of power before the Belgian Grand Prix had even started and he managed just one lap before retiring.

Teammate Norris ran fifth for almost the entire race only to retire just as he started the last lap, having also been hit with a loss of power.

Norris will switch to a new engine at the Italian GP, which will mean he takes a grid penalty, but that was the team's plan for him at Monza anyway.

Sainz has revealed that the engine that wrecked his Belgian GP is clear to be used in practice on Friday, even though he is set to ditch it for the race weekend itself.

"We know what the problem was now," said Sainz. "The good news is the engine is alive and I will be able to re-use it tomorrow in practice and see how it goes."

Sainz is expected to switch to Renault's latest Spec C engine once Friday practice is over.

He used the latest-spec engine in Friday practice at Spa and took a grid penalty there for introducing it into the pool that weekend.

Norris's failed Spec B engine from Belgium is not useable at Monza, but he will use an old engine in Friday practice before switching to his penalty-inducing Spec C at the weekend.

Asked if he was confident of avoiding a repeat failure, Norris said: "I don't know if I can be confident. I'd like to say that but it's not my department.

"They found the problem, they've got a fix for this weekend, it's not something that has happened before.

"They're working on everything: the team, Renault. I want to say it won't happen again and we won't have any problems but I can't guarantee it."