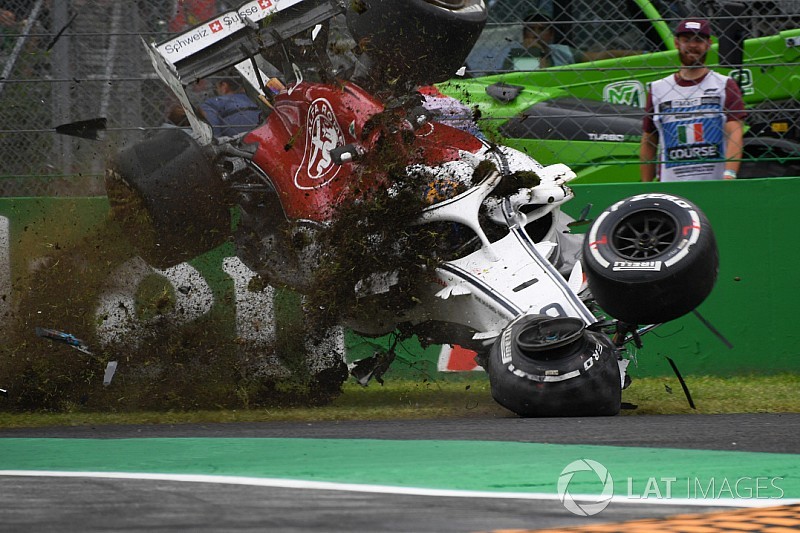 The DRS flap on Ericsson's Sauber did not reattach under braking for the first chicane at Monza in FP2, which meant he lost control of the car, slammed into the wall on the left-hand side of the track and spectacularly barrel-rolled to a halt.

Asked by Motorsport.com for his thoughts on the crash, Sainz said he was he "just glad he's OK" but said it showed how big the consequences can be when DRS goes wrong.

"This artificial device, the DRS, it's a dangerous thing," said Sainz. "If it doesn't close the car changes completely. On balance, on braking performance.

"So, I'm just wondering if Formula 1 is going to develop towards no need for DRS for overtaking.

"I do feel we need DRS nowadays because otherwise overtaking would be pretty much impossible, but hopefully they develop a formula without the need of DRS."

The drag-reduction system was introduced into F1 in 2011 as a way to improve overtaking.

It has often been criticised for making passing too easy, but has rarely been highlighted as a safety concern.

Several drivers expressed their relief Ericsson was unhurt after what Daniel Ricciardo called a "crazy" accident, with Toro Rosso driver Pierre Gasly admitting he was surprised Ericsson was OK.

"It was really scary," said Gasly, when asked by Motorsport.com about the accident. "I was in the car in the box and it's not the sort of images you want to see on TV before you go out.

"I saw him get out of the car. I was actually surprised, he seemed completely fine.

"At that speed, you arrive at 330km/h, when you lost the car that way and hit the wall and start to roll it's never nice."

Sainz praised the role the halo device and the car's roll hoop played in protecting Ericsson in the crash.

Toro Rosso driver Brendon Hartley said it "says a lot of great things about safety in F1" that Ericsson was unhurt and around in the paddock after the session.

"You never want to see that happen to another driver," said Hartley. "I've had my fair share of shunts this year and I know how he'll be feeling.

"It's another testament to F1's safety regulations, the fact he's sitting in the drivers' briefing with us chatting away, after a spectacular impact."