Sainz: Kvyat should have been more patient

Carlos Sainz believes Daniil Kvyat should have been more patient in the Chinese Grand Prix crash that caught up both McLaren Formula 1 cars.

Sainz and teammate Lando Norris were consigned to running at the back of the field in damaged cars after tangling with Kvyat's Toro Rosso at Turn 6 on the first lap.

Kvyat was blamed by the stewards and given a drive-through penalty. Both he and Norris eventually retired, while Sainz recovered to 14th.

"We were just all fighting in Turn 6, and at the exit of the corner I think someone didn't enjoy going side by side and opened the wheel a bit too much and created a bit of a melee, let's put it like that," said Sainz.

"It's a very long race in Shanghai, there's overtaking opportunities, [Alex] Albon finished in the points starting from the pitlane. It just shows - lap one, yes, it's important, but in places like Shanghai it's a long race and you just need to be patient."

Norris, who admitted it was hard for him to apportion blame before seeing any aerial footage, told Motorsport.com there was nothing he could have done to avoid being collected.

"Obviously he squeezed Carlos a little bit," Norris said of Kvyat. "He must've known I was on the outside of Carlos and a bit ahead. I almost got away with it but the contact between Carlos and Kvyat, or Kvyat and Carlos, then led to the contact into me. So I was, I would say, kind of the innocent one."

Told that Kvyat was penalised for the crash, Norris added: "I didn't see so I can't say exactly whose fault it was but if the stewards have said that then it's a shame because he effectively took both of our cars out of contention for getting points - which was possible.

"It's never nice to have contact with anyone, so for one guy to ruin both McLarens' races is frustrating."

Asked by Motorsport.com if his calls for greater patience on opening laps were meant specifically for Kvyat or for F1 drivers in general, Sainz replied: "I don't have any issue with him. I think he will know, he will see the images and that's it." 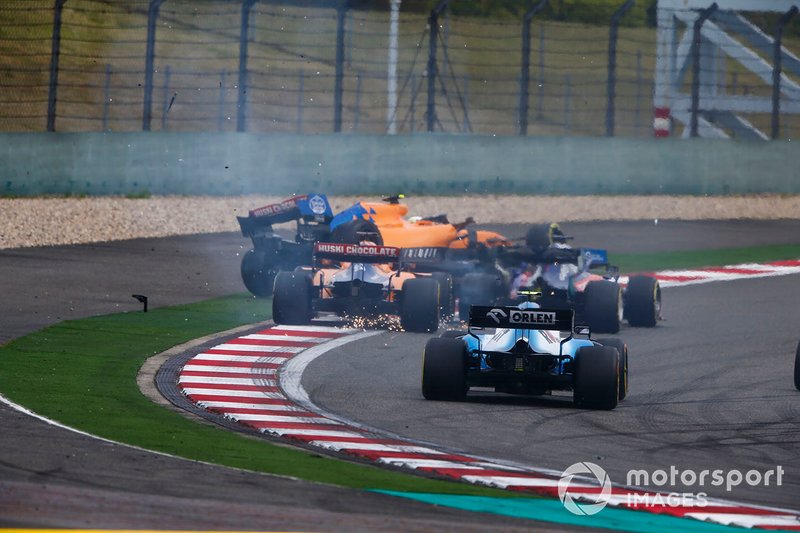 Sainz: How I'm pushing myself to adapt to Ferrari F1 car

Sainz: Norris can take McLaren to the top in Formula 1