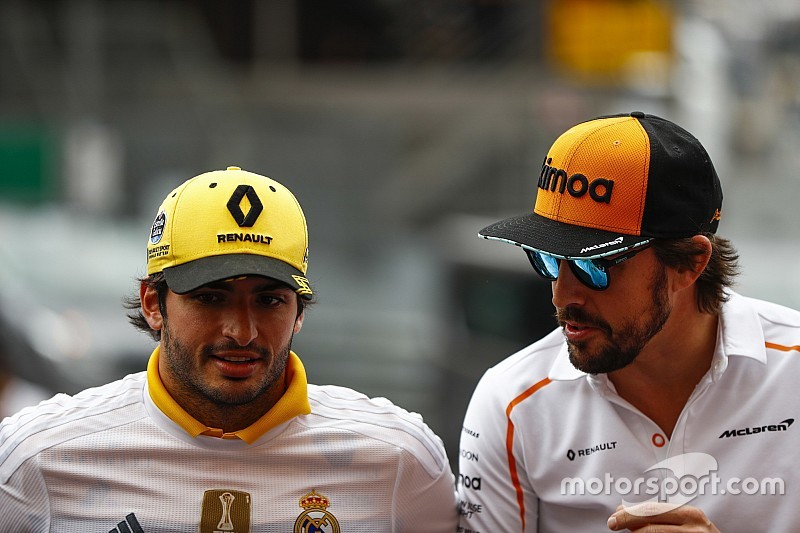 Sainz has been confirmed at McLaren on a multi-year deal after his long-time backer Red Bull relinquished an option to promote the Spaniard to its senior team in place of Daniel Ricciardo.

Two-time world champion Alonso is leaving F1 at the end of the season and McLaren boss Zak Brown called it "fitting" that Sainz will be his successor.

Sainz, who is racing for Renault this season, said it made a dream move to McLaren even better.

"I've been a McLaren fan for as long as I can remember," said Sainz.

"It's a great name in the sport with an incredible heritage, and the list of drivers that have raced for McLaren over the years are among the heroes of Formula 1.

"Fernando is of course one of them, so it's particularly special that I'll be taking his seat as part of the next generation of Spanish racing drivers behind the wheel of a McLaren.

"Finally, I'd like to thank everyone at McLaren for giving me this opportunity to fulfil a childhood dream.

"The team has a long-term plan for the future and I'm very much looking forward to playing a key role in its journey back to success."

Sainz joins McLaren with a career-best result of fourth from his 72 grand prix starts across four seasons with Red Bull's junior team Toro Rosso and Renault.

Brown said he has "the perfect blend of youth and experience".

"Although he's just 23, he'll be starting his fifth season in the sport with us and will bring with him a huge amount of racing experience, both in Formula 1 and with our partner Renault," said Brown.

"It's no secret that Carlos is a huge admirer of Fernando's, and it's fitting that he will be stepping into his seat as a Spaniard with a legendary name in motorsport.

"We think he'll be a great fit for McLaren and we're really excited to have him join us from next season and beyond."

McLaren said it will announce its completed line-up "in due course".

Sainz to race with McLaren from 2019 F1 season