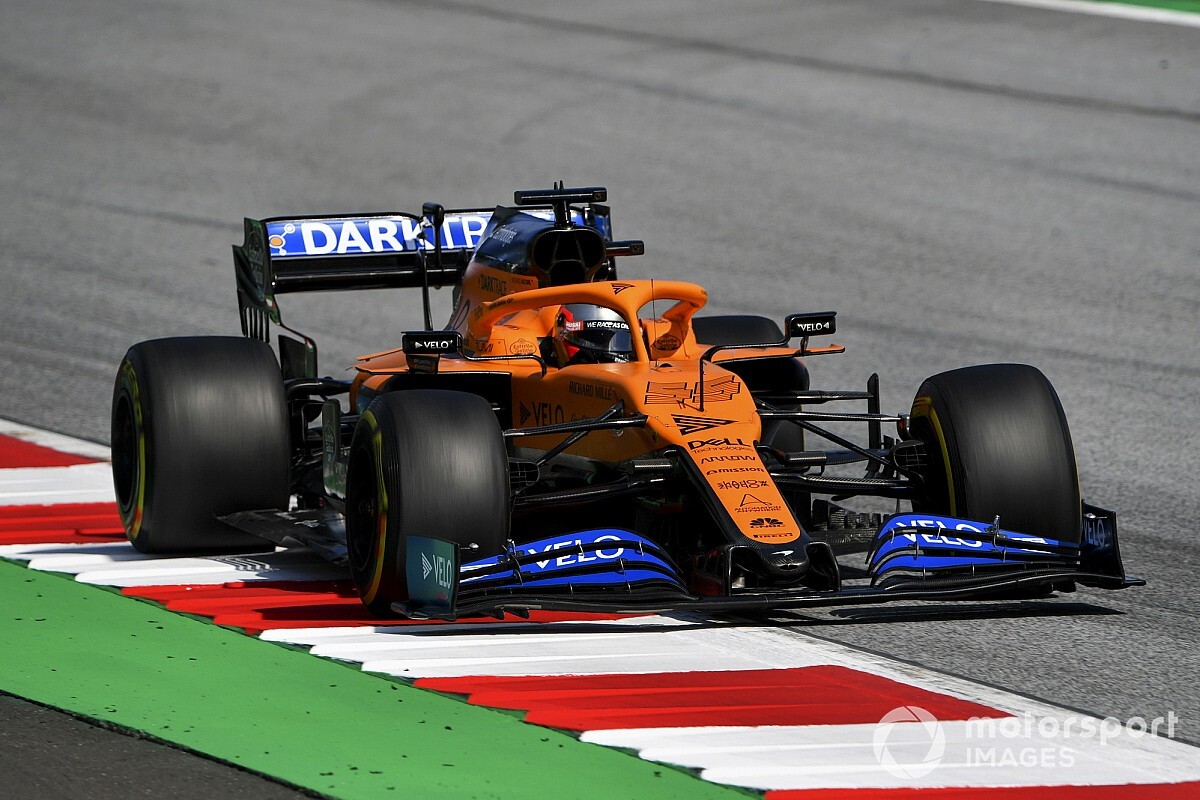 Carlos Sainz thinks he "will need some help" to convert his third starting spot in the Styrian Grand Prix into a second consecutive podium for the McLaren Formula 1 team, but believes the strength of the Woking team's package allows it to grab any opportunities that may arise.

Sainz qualified a superb third in the wet session at the Red Bull Ring, while his teammate Lando Norris will start sixth despite physical issues.

In last weekend’s race Norris started and finished third, both times benefiting from a penalty for Lewis Hamilton that gifted him a place.

Sainz says a combination of factors have ensured that McLaren is currently the team able to benefit when others slip up.

“I’m obviously motivated about [Sunday],” he said when asked by Motorsport.com. “And encouraged to see that this year with the car we have, in the two races that we’ve done when the opportunities present themselves, we’ve been there to grab them.

“And that allows you to be first in line to grab opportunities, and I think also the team on the strategy side is a very strong team, and we are executing races and super tricky qualifying [sessions] like this one very well.

“So it’s a combination of a lot of factors, the pace of the car, a very good strategy, and engineers in the garage taking good decisions. And decent drivers!”

Sainz conceded that to stay in the top three today he’ll have to rely on things going wrong for drivers in potentially quicker cars: “I think we are all extremely happy about Lando’s podium last week, but I still think that we are going to need the help of some others if we want to get another podium, like Bottas and Albon starting behind me.

“But if the opportunities come, I’m targeting to be there to grab them, and I’ve love to give the team another podium. We still know that on pure pace we need things to happen during the race.

“Whatever happens we need to keep our heads cool, we know what are fight is, we need to know that probably P3 is a bit out of position, and is thanks to the wet qualifying. At the same time if the opportunities come, we want to use them.”

Sainz agreed it was important for McLaren to take advantage of the fact that rivals Racing Point will start down the order, with Lance Stroll starting 12th and Sergio Perez 17th.

“They are the fastest car of the moment in the midfield, I would even argue that they are not part of the midfield anymore. We need to keep our focus, but they are going to make us suffer with the pace they have.

“We need to keep our head down, execute in races, and see where we are at the end of the year. Racing Point are going to be very tough to beat.”

Norris agreed that it’s no coincidence that the team has enjoyed a strong run since Sainz was third at Interlagos last year.

“I think we’ve made the most so far of our opportunities,” said the Englishman. “I don’t think we have the second or third best car, possibly even fourth. I think we’re doing a good job in terms of executing everything that we can do.

“I think we know that the Racing Points are also extremely quick, and they proved that on Friday, so for us to be as far as what we were [in qualifying] compared to them is pretty good. To outqualify one of the Red Bulls, for Carlos to outqualify one of the Mercedes, I think we’re doing everything in terms of maximising what we’ve got.

“We do have a good car, compared to last year, and a car which has improved, allowing us to make the most of these opportunities.

“The last few years we weren’t in a position to capitalise upon this, but come later last year in Brazil, and last weekend and this weekend, I think we’re in a position when other people don’t do a good enough job and we’re doing a good job then we can capitalise and take advantage of it.”