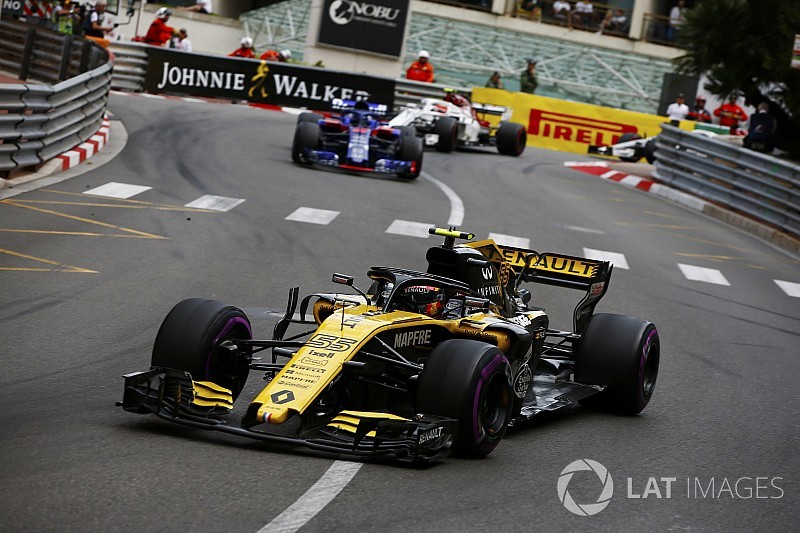 Carlos Sainz says the point scored in the Monaco Grand Prix felt "very bitter" after what he labelled as a "disaster" of a race.

The Renault driver had started from eighth position but went on to finish in 10th after struggling with his tyres following his first and only pitstop.

Sainz pitted on lap 15 for ultrasofts, a decision that left him with over 60 laps to do on Pirelli's second-softest compound.

The Spaniard believed the switch to ultrasofts instead of supersofts was a mistake that compromised his chances of a better result.

When asked by Movistar how scoring a point felt, he said: "Very bad, very bitter. I think the race was a bit of a disaster from the start.

"Even though I was saving the tyres, the fronts degraded a lot. We don't know why and it's something we need to pay attention to.

"And then the decision to switch to the ultrasofts on lap 15 was not the most appropriate," he added.

Asked if he expected the tyres to degrade so much, he said: "No... Well, I did, but apparently other people didn't."

Sainz finished two places behind teammate Nico Hulkenberg after Renault asked the Spaniard to let the German through as he was running much faster with fresher tyres.

Despite the near-impossibility to pass another car in Monaco, Sainz said the team order was just "an anecdote".

"I think the race was lost before that. It was lost with the degradation that we had with the ultrasofts," he said.

"Even if it's Monaco, the priority is the team and score points. We scored more than McLaren today. The mistake came long before that. Letting Nico through is just an anecdote."

After letting Hulkenberg through, Sainz was also overtaken by Max Verstappen, the Red Bull driver jumping part of the chicane when passing him.

The Spanish driver said he had no problems with the move.

"I don't care. He was so much faster than me that passing me off track or not is something I don't mind," he said.

Red Bull says Ricciardo's car was 25% down on power