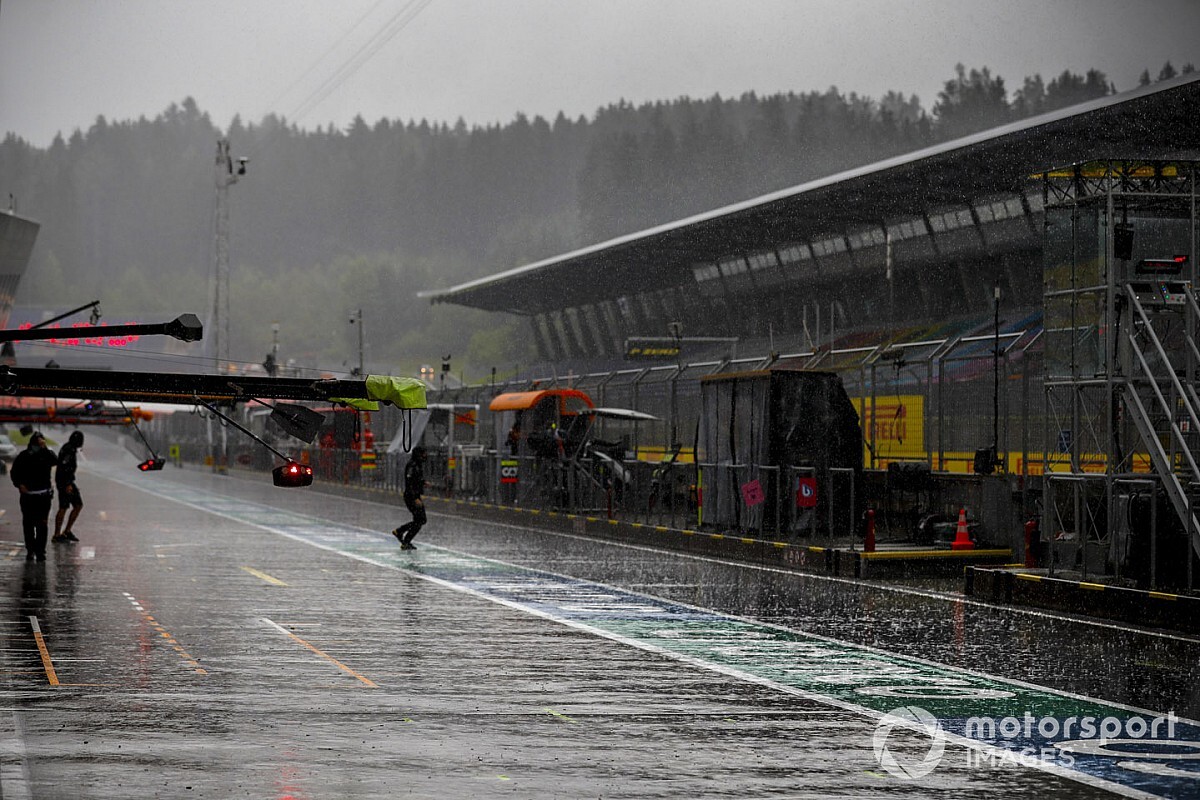 Formula 1 managing director Ross Brawn says there is a “chance” qualifying for the Styrian Grand Prix could go ahead on Saturday, but expects it to take place tomorrow morning.

Heavy rain and thunderstorms hit the Red Bull Ring in Austria on Saturday morning, forcing the opening Formula 3 race of the weekend to be red-flagged at half distance.

The start of the final F1 practice session was delayed indefinitely before being cancelled after 45 minutes without any green flag running due to the heavy rain.

Qualifying is scheduled to take place at 3pm local time, but provisions are already being made for the session to run on Sunday morning instead.

Brawn said the forecast suggested there was a chance qualifying could still go ahead today, but was confident it could take place on race day.

“Austria is always a challenging circuit weather-wise. We’ve been here before with these sort of conditions,” Brawn said.

“We’re just so relieved to be out racing. Austria was a wonderful place to start. I think the work the promoters have done here, the FIA, Formula 1 has done, I think it’s a very high standard and a good example of what could be done.

“I’m just so pleased to be here, even if the weather is lousy.

“This is a big front coming through, moving slowly but predictably. There’s a chance maybe at the end of today we’ll get some running, but certainly tomorrow looks fine.”

FIA race director Michael Masi said that qualifying is likely to start at the scheduled time on Saturday before being delayed as conditions continue to be evaluated.

As things stand, the medical helicopter is currently unable to take off due to the poor weather conditions, with the primary hospital in Graz being over an hour away by road.

“We’ll wait and see when qualifying comes about – the scheduled time 3pm – and evaluate the weather conditions at that point,” Masi said on Sky Sports F1.

“[If] the weather conditions are similar to now we’ll delay the start of qualifying and just continue to evaluate as time goes on and see.

“The likelihood is, from what we’re seeing forecast-wise, it will continue, but we just need to make a judgement as the day progresses.

“If we can’t run at all [today], we’ve got a draft timetable already for tomorrow that we’re working on. But we will qualify tomorrow morning, so not a dissimilar decision to Japan last year and we’ll just issue a revised set of procedures of what the teams can and can’t do tonight.”

Masi informed teams on Friday there was a strong chance Saturday’s running would be washed out, potentially leading to the results from FP2 setting the grid for the race.

It led to a busy second practice session on Friday afternoon that was led by Red Bull’s Max Verstappen ahead of Mercedes driver Valtteri Bottas.

Brawn explained that qualifying could go ahead on Sunday morning, but would force the cancellation of the F2 sprint race and the Porsche Carrera Cup event.

"We’ve got a schedule tomorrow which means we only lose the Formula 2 Sprint Race and one of the Porsche races,” Brawn said.

“We think tomorrow we can fit everything in, so there’ll be qualifying in the morning.

“If we can’t do that, then as you know, the FP2 times become relevant, but I hope we don’t need to do that.

“I think we’ll have qualifying in the morning.”

F1’s most recent Sunday qualifying took place last October at the Japanese Grand Prix when a typhoon forced Saturday’s running to be called off.

Does America really need an American F1 driver? You may not like the answer

Does America really need an American F1 driver? You may not like the answer