Sauber's Felipe Massa answers questions ahead of the European Grand Prix Q: It is no secret that Monaco is not one of your favourite tracks. Has that changed after your fifth place last Sunday? Felipe Massa: Finishing fifth in Monaco was ...

Q: It is no secret that Monaco is not one of your favourite tracks. Has that changed after your fifth place last Sunday?

Felipe Massa: Finishing fifth in Monaco was obviously a fantastic experience and will give me nice memories. Monaco is the most prestigious race of the year so this result was also important for the Sauber Petronas Team. But it doesn't change the fact that this track will not be amongst my favourites. I appreciate it, but I prefer those with fast, challenging corners. 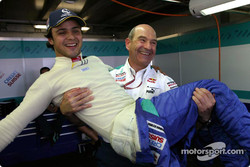 Q: What do you feel about your race in retrospect?

FM: Monaco has a history of producing crazy races and results, so it was my supreme goal to make it to the chequered flag. After a good start I tried to find my rhythm, keep my concentration and an eye on the tyres. When the Safety Car went out, we anticipated my second pit stop. It all went well, but the challenge for me was that I had to complete 37 laps instead of the planned 29, so my tyres suffered badly towards the end of the race. I was really fighting to drive at a decent pace and still keep control of the car.

Q: At this stage you were under great pressure from Cristiano da Matta. Was there a real threat that he might overtake you?

FM: Not really, although he was much quicker towards the end. I knew that it is very difficult to overtake on this track, and Cristiano is not the kind of guy who does silly things, so I just concentrated on making no mistakes and giving him no opportunity. I have to say it was not easy, because my rear tyres had completely gone, so the car was very nervous under braking and exiting the corners. It was a little tight in the last lap because I got stuck behind Nick Heidfeld, and at the same time Cristiano was pushing from behind. The whole game was about keeping cool.

Q: The Sauber Petronas Team seems to make continuous progress; where does it come from?

FM: The main progress definitely comes from the new wind tunnel. We started to feel the first effects at the race in Imola. Since then our engineers have constantly improved the car. I have to say they are doing a tremendous job. We are only at the beginning with our work in the wind tunnel and we will need some time to fully exploit its potential, but it is a fantastic tool and the basis for us to further improve in the medium term.

Q: Looking back on the past six races, how do you think you were able to benefit from your experience as a Ferrari test driver?

FM: My year with Ferrari was of incredible value to me. I learned a lot about all the technical aspects of the car and also how to improve my work with the engineers. When I entered Formula One in 2002 basically all I had was my talent, but now I also have the technical knowledge which enables me, together with my engineers, to fully exploit the potential of the car. I'm a much more complete Formula One driver than I was in 2002.

Q: At the beginning of the season some people regarded you as being inconsistent. How do you answer this kind of criticism?

FM: For the first two races our car had no power steering. With the amount of grip and downforce the cars have nowadays, it was really difficult to keep the car on track. Particularly with new tyres, the forces were at the limit. Our engineers reacted very quickly, and since the race in Bahrain we have been using power steering which helps a lot to be precise and consistent. However, I finished all the races except the first one. I think I've been competitive compared to Giancarlo, who has the reputation of being one of the most experienced and quickest drivers in Formula One.

Q: What do you expect from the race at the Nurburgring next weekend?

FM: After our fifth place in Monaco we are obviously a little spoilt, but realistically I would be happy if I could be in the points. We had a very promising test in Silverstone prior to the Monaco race where we were able to further improve the car, particularly its balance and stability. This enables me to brake later and bring more speed into the corner.

Q: At the beginning of the season you moved to Switzerland. What do you like about living there?

FM: With all the travelling I'm doing, it's really important for me to be able to relax when I'm at home. I already lived in Switzerland in 2002, and from this time I know that it's a very calm country. I really enjoy living there. In addition, it only takes me 20 minutes to get to the factory when I want to meet with the engineers.

Q: What are your goals for the reminder of the season?

FM: I want to score as many points as possible and it would be fantastic to finish in the top 10 in the drivers' championship. In addition, I want to support the team to keep its fifth position in the constructors' championship. I'm fully aware that these are very ambitious goals, but I'm a fighter!