Sauber can be "very competitive" with low-fuel fix 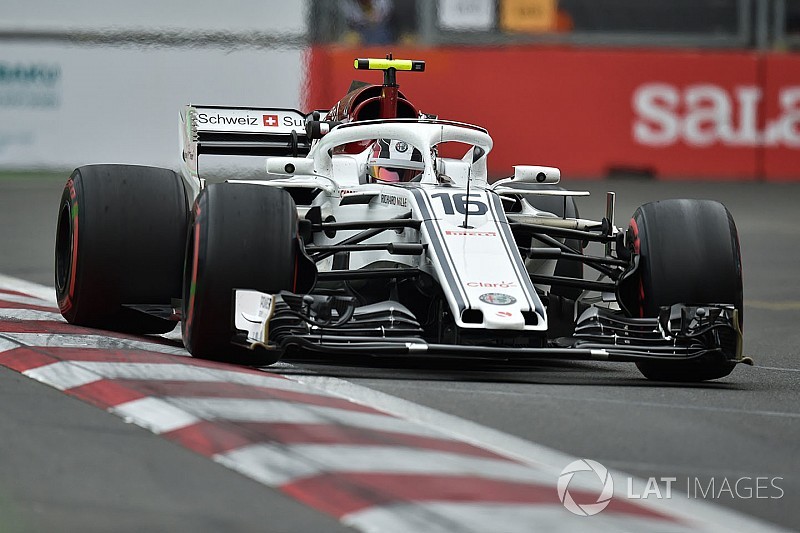 The Sauber C37 Formula 1 car can be "very competitive" once the team addresses its low-fuel weakness, driver Charles Leclerc believes.

Leclerc's breakout sixth-place finish in the Azerbaijan Grand Prix took the Swiss outfit to 10 points from the first four races, its 2018 tally already bigger than that its points totals from three of the four previous seasons.

The team's qualifying form, however, has been more subdued, with Baku marking the first time this season that a Sauber made it out of the first qualifying segment.

Leclerc's Azerbaijan GP result was aided by attrition, but the Monegasque has highlighted the opening stint - in which he maintained top-10 pace and even kept the Ferrari of Kimi Raikkonen at bay for a number of laps - as evidence of the C37's race pace prowess.

"As I was saying before the race, our race pace is stronger than our qualifying pace at the moment," Leclerc explained.

"Now we really need to investigate that and to make our low-fuel pace better.

"But if we manage to do that, we should be very competitive - because our race pace at the beginning of the race was really great. Then at the end with low fuel we struggled a bit more."

Marcus Ericsson, who had recorded the team's other points-scoring finish of 2018 in China by finishing ninth from 17th on the grid, reckoned that Sauber is struggling with the softer compounds that it has to run in qualifying.

"It’s still clear we are struggling more over one lap than race pace," Ericsson said. "Charles did a very good job in qualifying [in Baku] but still I think we are stronger in the race.

"We are really struggling with the softer compounds, I have a feeling that for some reason we haven’t really found a way to optimise them yet."

The Swede added that making the C37 more competitive over one lap should now be top of Sauber's to-do list.

"For me that’s the main priority now going forward, that we manage to find an extra bit of performance on Saturdays, because I really feel on Sundays we have a good car to fight the midfield.

"Charles’ pace today was really strong compared to the cars around him and if we have a good track position for the race, starting in the mix, we can have strong races.

"You need a good starting position. We need to take a step."