Schumacher can stand the heat

The Malaysian Grand Prix is just a few days away and drivers have been working hard on their physical fitness for one of the toughest races of the year. Michael Schumacher often gets out of his Ferrari at the end of a race looking like he's hardly ...

The Malaysian Grand Prix is just a few days away and drivers have been working hard on their physical fitness for one of the toughest races of the year. Michael Schumacher often gets out of his Ferrari at the end of a race looking like he's hardly broken a sweat, and while the conditions at Sepang are bound to be trying, it's not something he's unduly concerned about. 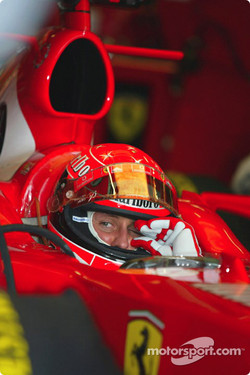 "It will be important to see how the drivers and the cars stand up in the heat and humidity of Malaysia," he said. "I am in the fortunate position of being able to tolerate such conditions well but I think it will be difficult and stressful all the same. We shouldn't worry too much though, eh?"

Ferrari's reliability is legendary and there should be no problems in Malaysia. Many are predicting the Bridgestone tyres may suffer in the heat but Schumacher is confident in the Japanese manufacturer. Teammate Rubens Barrichello returned to Europe after Melbourne to test at Valencia and tyres were one of the things in focus.

"Ferrari, traditionally, have never had reliability problems," said Schumacher. "And if some believe that the tyres could create some doubt, and it seems to me that there a number of people out there who think this, I'd respond by saying that the Bridgestones are excellent. Rubens stated that he was very satisfied with them after the last series of tests."

The Sepang circuit is one of the more technical layouts on the F1 calendar and the six-time champion is looking forward to tackling it. "I consider this circuit to be a real challenge," he remarked. "It is not easy to drive in these conditions."

"The Malaysian track has its built-in difficulties: it is flat, maybe too flat, and above all it is very narrow. This makes it hard to get the racing line right and each driver has to find the best trajectory. Malaysia is, undoubtedly, full of hazards but also has some enjoyable sections. I can only hope that we can repeat our Melbourne performance!"