Dec.30 (GMM) Michael Schumacher is fighting for his life in a hospital in France.

The seven time world champion, who retired from F1 for the second time last year, sustained a head injury while skiing off-piste at the Meribel ski resort on Sunday. 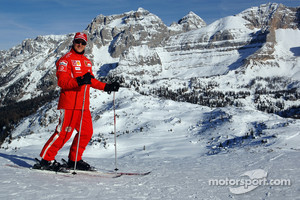 Early reports suggested the 44-year-old former Ferrari and Mercedes driver's injuries were not serious, despite him striking a rock with his helmeted head.

But the university hospital in Grenoble said in a statement: "He suffered a severe head injury with coma on arrival, which required immediate neurosurgical intervention. He remains in a critical situation."

"His state of health has worsened and his condition is considered life-threatening, according to our information," the respected local newspaper Dauphine Libere reported.

The hospital has scheduled a press conference for Monday morning.

"The fact that they undertook something almost immediately, that he was admitted to the surgical unit, suggests that something very serious has happened," Chris Chandler, a London neurosurgeon, is quoted by the Guardian.

Professor Gerard Saillant, a close friend of Schumacher's who treated his broken leg in 1999, rushed from Paris to assist with the treatment.

It is reported that Schumacher, who was skiing with his 14-year-old son Mick, is now surrounded by his family, while close friends Ross Brawn and Jean Todt are also at the hospital in Grenoble.

Former F1 driver Olivier Panis, a local, was reportedly turned away when he tried to visit Schumacher.

Tributes and well-wishes for Schumacher, a global sporting legend, have poured in, and his personal website has crashed under the demand for information.

"A security cordon has been placed around certain areas," a hospital spokesman was quoted by the Daily Mail. "Extra officers have been drafted in."

Massa claims to be 'as fast' as Alonso

Exclusive: Panis says ART’s Vasseur would “do the job” for Renault F1