The summer break has ended but in fact, no one has told the people who control the weather here in Istanbul, as the temperature was a very summery 30 degrees as Michael Schumacher reacquainted himself with the F1 media in the Istanbul Park paddock ...

The summer break has ended but in fact, no one has told the people who control the weather here in Istanbul, as the temperature was a very summery 30 degrees as Michael Schumacher reacquainted himself with the F1 media in the Istanbul Park paddock this afternoon. 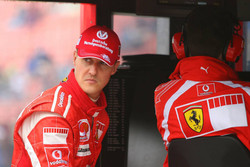 A quick recap of events in Budapest got things underway. "Everything that can happen over the course of a season seemed to happen in just a single race weekend!" commented the Scuderia Ferrari Marlboro driver.

"Now we have to look ahead to the five remaining rounds. But Hungary did not end up being so bad for us, because if you look at the race while Fernando was still in it, you could think the championship was over for us. But then in the end we got lucky and I got a point. I can still win the championship and that point could be very vital at the end of the season."

Michael remained positive even though the next question centred on the less than successful 2005 race here in Turkey. "The main surprise last year was that we did not have a competitive package here," recalled the German.

"The track here is very challenging and we hope we are better prepared and competitive this year, so that we can put on a good show for all the Ferrari fans in Turkey, who were disappointed last year. I hope this weekend will be better and I believe it will be."

Schumacher would not make any prediction about the outcome of the championships, basing his reluctance on how quickly the situation can spin around. "The championship did not look too good for us up to Indianapolis and some people thought the battle was over," he maintained.

"But within three races we turned the situation around and that shows how quickly things change in this sport. We are optimistic about the rest of the season and have faith in our strengths."

Yesterday's ruling from the FIA that mass dampers are now confirmed as illegal to use prompted an opinion in the paddock that this would favour the Scuderia as their direct rivals were perceived to have got the most benefit from the mass dampers. But Schumacher did not agree entirely with this view.

"Sometimes in F1 you have to accept unpopular decisions as we did earlier this year when we had to accept some changes on our cars. I think the system benefited Renault or they would not have used it, but developments move forward so quickly in F1 that they will have found a way around the problem of not being allowed to use it anymore."

Tracks, tyres or team-mates? Which would have the biggest effect on the outcome of the title battle? "I don't think you can specify which tracks will suit us and which will suit our main rivals," replied Michael.

"As for team-mates, they could play a key role, but they will mainly be fighting for themselves and in our case, Felipe is keen to fight for third place in the Drivers' championship."