Jun.20 (GMM) Michael Schumacher did not become F1's seventh winner of 2012 in Canada, but his boss Ross Brawn is hoping Valencia is a case of 'lucky eight' for the seven time world champion. 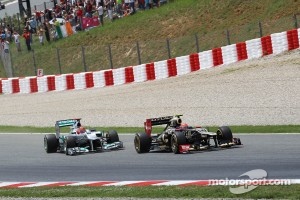 Kimi Raikkonen, Lotus F1 and Michael Schumacher, Mercedes AMG F1 at the start of the race

Brawn, Mercedes' team principal, admitted it is possible the sport's unprecedented run of new and different winners this season could continue on Spanish streets this weekend.

"I'm thinking of Michael in our car," said the Briton, "but the Lotus is good and they haven't won, while Sauber have put in some great results too."

Pirelli has been either credited or blamed for the results 'lottery' so far this year, and the tyre marque's Paul Hembery also tipped Schumacher as the potential eighth winner.

"He probably would have won at Monaco, so why not here?" the Pirelli motor sport director is quoted by Auto Motor und Sport ahead of the European Grand Prix.

Another hot favourite is Lotus' Kimi Raikkonen, although his teammate Romain Grosjean has been at least as impressive as the 2007 world champion.

"I've never won in Valencia," said Finn Raikkonen, "so it's a good target."

Fellow Finn Heikki Kovalainen agreed that a bet on Lotus would be well placed.

"Yes, Lotus have been in good shape but so far they just haven't quite put everything together," the Caterham driver told the broadcaster MTV3.

"Romain Grosjean has driven well so he is definitely putting up a good fight to Kimi," added Kovalainen.

He also tipped Schumacher as a potential 2012 race winner.

"He has been quite fast in many places, but very unlucky on the technical side -- he has had six or seven different problems," noted Kovalainen.

The great German is therefore surely out of the running for the title, but there remains a swathe of candidates within a handful of points or a victory or two of true contention.

"This championship is going to be won on consistency and it's easily possible that the world champion will only have one or two race wins," admitted Sam Michael, the sporting director at title leader Lewis Hamilton's McLaren team.

"You won't need to win five or six Grands Prix to win this year's world championship," he is quoted by Sky Sports.

Boss Martin Whitmarsh agrees: "Whereas in previous years there was an emphasis on the 'big' results, this year it seems that minor points placings could provide a decisive edge in the title battle."

McLaren and Red Bull fastest in qualifying, race in 2012