Michael Schumacher recently spoke of his reluctance last year to take part in the 2001 Italian Grand Prix at Monza after the tragedy that struck America on September the 11th. Schumacher was very affected by the events that happened only days before ...

Michael Schumacher recently spoke of his reluctance last year to take part in the 2001 Italian Grand Prix at Monza after the tragedy that struck America on September the 11th. Schumacher was very affected by the events that happened only days before the start of the race weekend and also by the accident in which CART race driver Alex Zanardi lost both his legs. He was, at the time, considering not racing at all. 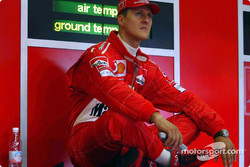 Michael Schumacher.
Photo by Shell Motorsport.
"I certainly thought about it," he told Italian television, in an interview to be broadcast soon. "It was a key period in my life with the attack on the Twin Towers and the dramatic injury to Alex Zanardi. It was difficult to get back in the car and drive again as if nothing had happened. I didn't feel like it and I would have rather been anywhere else than driving."

"I felt like it was a bad sign to be driving at Monza after what had happened. I was very resistant but then I decided to get out on the track although my heart wasn't in it. I was there in the car but in reality I was somewhere else."

The current champion finished fourth in a subdued race that was won by Williams' Juan Pablo Montoya, his maiden F1 victory overshadowed by the sombre atmosphere that pervaded the circuit. Schumacher was comforted by the reaction of the American people when he went to the United States for the next race, the U.S. Grand Prix held at the Indianapolis Motor Speedway.

"It was important to take into account that life goes on, making every effort possible because events like that should not be repeated," he said. "I felt comforted when a few days later we went to the United States for the Grand Prix where I saw that the Americans, however upset, were dealing with the shock. I saw people who were ready to start again with great strength in their soul and the need for normality and a new start."

Schumacher and Badoer at the Maserati Trofeo