Michael Schumacher silenced the critics of Ferrari's performance so far this year by winning the Scuderia's home race in San Marino, the fifth time he's taken victory at Imola and his first this season. After an early fight with brother Ralf and ...

Michael Schumacher silenced the critics of Ferrari's performance so far this year by winning the Scuderia's home race in San Marino, the fifth time he's taken victory at Imola and his first this season. After an early fight with brother Ralf and later pressure from Kimi Raikkonen, Michael took the chequered flag ahead of the McLaren and Rubens Barrichello. 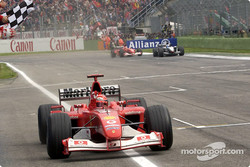 Imola was all about pit stops; many teams opted for a three-stop strategy which resulted in nearly as much activity in the pit lane as there was on track. Jordan's Ralf Firman and Minardi's Jos Verstappen both started from the pit lane and Jaguar's Antonio Pizzonia stalled on the grid. Ralf got a great start and took the lead from pole man Michael.

Pizzonia managed to join the race a lap down -- just before the start, team-mate Mark Webber had expressed slight concern about the clutch not biting properly. It appears he was correct, very slow to get away and hampering BAR's Jacques Villeneuve who was forced to go very wide, along with David Coulthard.

This put Webber down to eleventh from his fifth spot on the grid. Michael was right behind Ralf, who was grimly holding him off. Schumacher Senior had a go down the pit straight, then again at Rivazza; the first few laps were a real battle between the two and Ralf wasn't shy in defending his lead.

Fourth placed Juan Pablo Montoya was closing on Barrichello while McLaren was initially conservative. The Toyotas were the first to pit and in the next few laps the pit lane activity was frantic. Both Williams and Ferrari opted for a three-stopper, McLaren a two, although it seems that they all deterred from original strategy.

After the first round of stops, order at the front was Michael, Ralf, Barrichello, Raikkonen, Montoya and Coulthard. These six remained the front runners for most of the race but in varying positions.

Villeneuve was the first retirement, pulling off track: "We seem to get all the bad luck," he said afterwards, the problem seemingly hydraulics. "But that's the way it goes. We have to keep working because the car is fast."

Justin Wilson was next out, suffering a refueling problem with the Minardi: "The fuel just wouldn't go into the car," he said, sounding mystified. "I think it's the fuel rig but I'm not really sure. The car was fine but it overheated when I was waiting for them trying to get the fuel in."

Verstappen faired not much better, pulling off track with an unknown problem. Montoya was complaining on the radio about his tyres and shortly afterwards came in for a change. Unfortunately, he too suffered a refueling problem and had to pit again a lap later for the team to have another go.

Webber's problems were compounded by getting a drive through penalty for speeding in the pit lane and he later coasted in to the pits and retired: "I think it was the drive shaft," he commented. "We had a bad start, then a problem with the cruise (pit lane speed limiter). We have got a lot of work to do but the potential is there, the car is fast."

The Ferraris both had good second stops but after that round of pits Raikkonen was up to second and starting to put pressure on Michael. Pizzonia caught his pit crew by surprise, coming in when they were obviously not expecting him and causing a mad rush to find out what he was wanting.

Barrichello was closing on Ralf, Coulthard hot on their heels, and there were one or two scraps down in the midfield but the action was somewhat sedate compared to the excitement of the first three races. Raikkonen ducked in for his third stop, giving Michael a chance to put some distance between them but they both had a spot of bother.

Raikkonen was slow getting away from his stop and in the mean time, Michael went well wide at Piratella, kicking up a lot of dirt, so they both lost out a bit. Barrichello had some problem with his left front wheel in his stop which delayed him too. He was aiming to get out ahead of Ralf, which didn't happen, so he took him on track instead a couple of laps later.

Ralf struggled through Rivazza allowing Barrichello to close right up, then the Brazilian swooped past heading into the pit straight. So, after the last set of stops, running order was Michael, Raikkonen, Barrichello, Ralf, Coulthard and Fernando Alonso, the Renault driver having a quiet but productive race.

Both Jordans retired, Firman's engine sounding rough as he came down the pit straight then giving up on him a few corners later. Giancarlo Fisichella exploded in fine style at Rivazza, not a great day for Ford.

In the final laps, Barrichello was homing in on Raikkonen who appeared to be struggling with his tyres. Given another lap or two, Rubens would probably have dispatched him in the same fashion as Ralf, but he simply didn't have the time. Michael took a deserved victory, proving Ferrari certainly isn't having trouble as much as some would have us believe.

A not very exciting race but an interesting one. The multi-stop strategies meant you were never quite sure what the order was going to be and the odd pit-stop gremlins contributed to the curiosity. It was a deserved result for Ferrari at its home race, the team worked hard all weekend and the Tifosi were certainly ecstatic.

Michael did take to the podium at the end, for a sombre ceremony but Ferrari boss Jean Todt stood in for him at the press conference. In such difficult circumstances, to win the race was a credit to Michael's skill and determination. Ralf too drove well, the brothers showing admirable courage.

Brown: Montoya is “contributing to everybody” at Arrow McLaren SP