Oct.18 (GMM) Michael Schumacher has revealed he will not simply sit at his palatial Swiss home in 2013, having retired from active competition in Formula One. 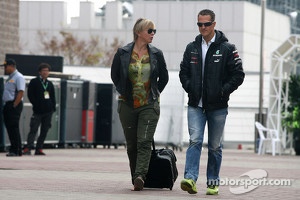 The seven time world champion is said to be weighing up an offer to work as a consultant in an ambassadorial role for the Mercedes team in 2013.

He told DPA on Wednesday that he will not just sit at home.

"I've always worked internationally and will continue to do so," the 43-year-old said.

But what exactly will he do after travelling to the final four international 'flyaway' Grands Prix in his active Grand Prix career, in India, Abu Dhabi, the US and Brazil over the next six weeks?

"My life afterwards? I have so many options about what I could do, but I'm not thinking about it yet," said the former Jordan, Benetton and Ferrari driver.

He told Bild newspaper: "I want to take my time to find my way."

Schumacher, however, insisted that he will not simply swap his active racing role for another full-time F1 job.

"I will definitely not be in Melbourne," he said, referring to next year's season opener.

Rosberg not worried about Hamilton challenge