Formula 1 delayed the start of second practice for the Saudi Arabian Grand Prix on Friday amid the fallout of an attack on an oil facility near the Jeddah circuit.

With Houthis having claimed responsibility for a missile strike on an Aramco facility close to the track, F1 CEO Stefano Domenicali called an emergency meeting in the Jeddah paddock on Friday evening.

All the current drivers, plus team principals, were updated on the latest information regarding the attack and what F1 was planning to do in response.

With the meeting running near the start of practice, it was announced before the scheduled 8pm start time that it would be delayed to allow drivers suitable preparation time for running. The delay ran for 15 minutes.

F1 is expected to issue a formal statement later detailing its plan of action in response to the events.

The proximity of the attack to the track on a weekend where Saudi Arabia is in the spotlight through the hosting of a major international sporting event has served to heighten security concerns.

The unprecedented meeting in the paddock took place after an explosion at an Aramco facility near Jeddah's international airport, which is less than 10 miles from the Corniche circuit. 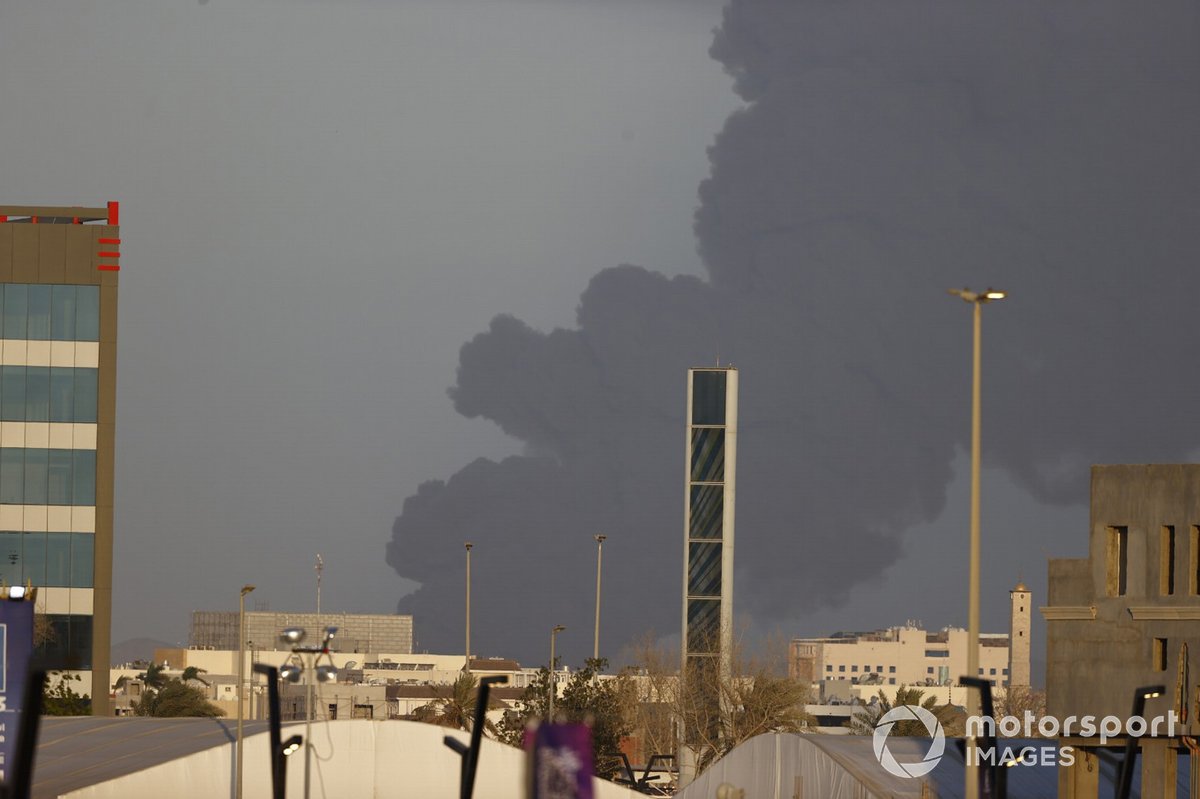 Smoke in the sky of Jeddah

It is unknown if the Houthis timed the attack deliberately, but as F1 cars took to the Jeddah street circuit for the opening practice session, black smoke was seen drifting into the sky as the result of the explosion and fire.

A Houthi military spokesman said the organisation claimed responsibility for the attack on Aramco's facilities, which have been hit with missiles, and the Ras Tanura and Rabigh refineries with drones.

He also made it clear that its attacks would continue until the Houthis had achieved their ambitions for Yemen.

"We were assured by the government that it is safe to drive here," Haas team boss Gunther Steiner told ServusTV. "After practice, we'll have another meeting. Personally, I feel absolutely safe. Otherwise I wouldn't be here."

FIA Formula 2 drivers said in a press conference after their qualifying session, which took place between F1's FP1 and FP2 sessions, that they were unaware of the attack and had not yet been briefed on the ongoing situation.

The incident on Friday comes less than a week after the Houthis attacked a number of targets within Saudi Arabia.

The Coalition to Restore Legitimacy in Yemen issued a statement confirming it was responsible for a missile that last Saturday caused a fire to break out at an Aramco distribution centre in Jeddah.

It also launched a barrage of missile and drone attacks on various targets in the country.

F1 tells drivers Saudi GP will go ahead despite nearby attack