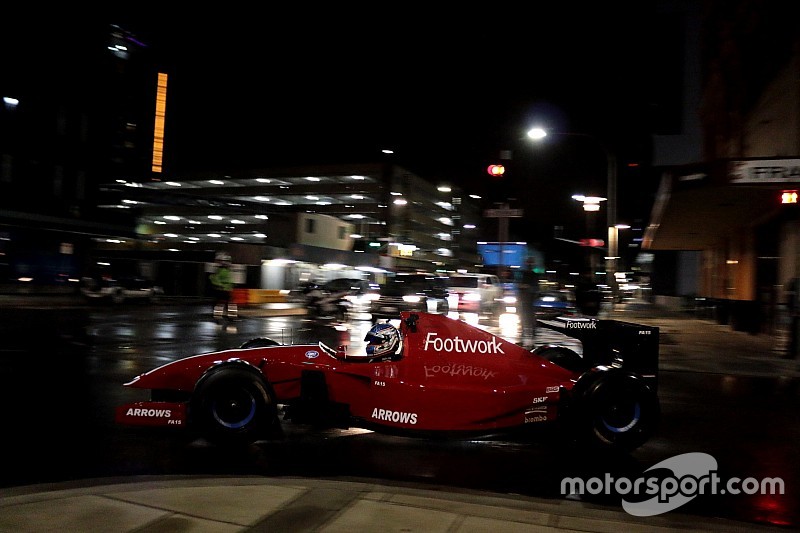 The video filmed during a daring late-night demonstration run of Formula 1 cars through the city streets of Adelaide has been officially launched.

The short promotional film was shot as a marketing tool for the upcoming Adelaide Motorsport Festival, which lets classic F1 machinery loose on part of the old Australian Grand Prix circuit in the South Australian capital.

It features three F1 cars completing a daring open-road run through Adelaide and its surrounding suburbs, with Sundown 500 winner Cam Waters in a Benetton B186, Brad Jones Racing Supercars star Tim Slade in a Footwork FA15, and Super2 driver Josh Kean in an Arrows A21.

“We really only had one shot at this, it’s not like we could keep running back and forth over the same piece of road, so everything had to be right,” said event director Tim Possingham.

“It had to be kept under wraps to a great degree as well so that we maintained complete control along with police and other regulatory bodies.

“Unfortunately we lost all our forward facing in-car footage when it rained halfway through the filming and one of the cars suffered a gearbox issue early on in the piece, amongst other things.

“These cars are spectacular, but also very complex and cantankerous which means that behind the scenes there were teams of mechanics with starter mechanisms, oil heaters, radiator air blowers and a myriad of other things to fire them up and keep them going.

“Needless to say these cars don’t like stopping and starting – they are made to go flat out or nothing, pretty much.

“We were blessed to have a very cooperative department of planning, transport and infrastructure as well as an amazing team within the SA Police that helped facilitate the shoot.

“The real hero was a personal friend that shares my passion for motorsport, it is he who gave up the cars from his private collection to have these drivers pilot millions of dollars of machinery in wet conditions, on slick tyres!

“None of this would happen without him, his faith and a common goal.”

The event will run between December 7 and 10.