Nico Hulkenberg was this time fastest for Force India during the second day of testing at the Circuit de Catalunya, Spain. He already took second place yesterday, but today he was more determined than ever and already during the morning claimed the fastest time with a lap of 1m22.608s on the soft Pirelli tyres.

Another youngster took possession of second spot, as Sergio Perez in the Sauber set a lap of 1m22.648s, while reigning World Champion Sebastian Vettel had to be satisfied with third sport, 0.283s slower than Hulkenberg. Hulkenberg has mostly done testing he stated, “We started the day with some aero work – trying some constant speed runs and collecting more data. Then, the rest of the day was spent working on the balance of the car and trying out all four tyre compounds.” 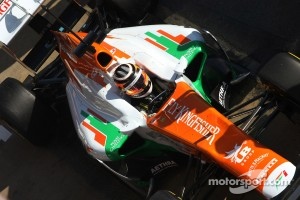 And in the afternoon? “I did some short runs, long runs and just got a feel for the tyre characteristics and how the car reacts to them. Once again the car has been very drivable all day and our baseline set-up has proved to be a good starting point for running all the different compounds,” Hulkenberg replied.

Two teams were absent today for the preparations for the 2012 FIA Formula One Championship: HRT who’s chassis didn’t pass the FIA crash test, and Lotus who abandoned this week’s testing at Barcelona due to an issue with their E20 chassis.

A new but familiar face today in the Barcelona paddock as it was Vitaly Petrov’s turn at the wheel of the Caterham. The Russian replaces Jarno Trulli at the Anglo-Malaysian team this season and today was his first taste of the 2012 Caterham. Also new in the paddock was Valtteri Bottas, Williams’ test and reserve driver, who was testing the new Williams today.

It was a dry and sunny day again in Spain and a very eager Petrov was the first to venture onto the Barcelona track. The rest soon followed for a few installation laps, but half an hour into the morning session the red flag came out, and just like yesterday it was Daniel Ricciardo who had stopped his Toro Rosso at Turn 6 after he had run out of fuel. 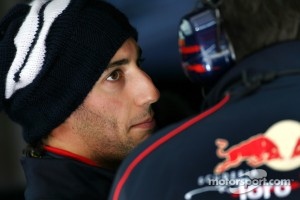 Again problems for Ricciardo who caused to red flag periods

After his car was retrieved it was time for some serious lap times, Alonso, Petrov, Hulkenberg and Hamilton soon took to the track again to set their personal best time of the moment.

Alonso set a time of 1m24.077s, Hamilton 1m24.040s, Perez 1m24.188s, but Hulkenberg was fastest with a time of 1m23.141s. Again the young German showed his potential with an excellent flying lap, just like yesterday the medium Pirelli compound was the favorite tyre compound during the morning.

Meanwhile Petrov was still doing some set-up work on the new Caterham to make him comfortable in the car, while others returned to the pits to discuss technical issues with their mechanics and engineers. 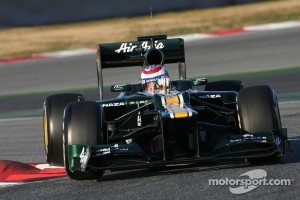 Petrov about his first runs in the Caterham, “This morning we had a couple of issues with the seating position and the brakes, but you expect that from a new car and they were little things that we were able to fix quickly.”

And he added, “In the afternoon we put in a few more long runs and that'll give us a lot of data to work on tonight and I think tomorrow it will be more of the same. I think that was a pretty positive day. We completed 69 laps and got through most of what we had planned.”

Nico Rosberg was at the wheel of the new Mercedes W03 today, he spent some time in the garage before embarking on his first run on the medium tyres. He did another two stints on the mediums and halfway the morning his fastest time was 1m24.730s. He didn’t waste any time and again went out for another long run in the W03, as he was eager to learn about the characteristics of the new Mercedes.

With only a half hour to go, the temperature had risen to some 14C on track, and now it was time for the softs and supersofts. 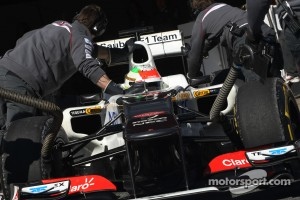 Perez commented, “I am happy with how things went, we have gathered plenty of information to go through now and I believe we are working in the right direction. I hope we get some more work done with Kamui driving the next two days, and then we will be well prepared for next week’s final pre-season test session.”

Exactly one hour later Rosberg was the man to go out first, again on the medium Pirellis. His lap times were very consistent and he stayed on track to squeeze out a few more laps in the 1m24s. Soon Hamilton joined him in the McLaren, the only new 2012 car without a stepped nose, and posted his fastest lap of the moment with a time of 1m23.806s.

Charles Pic was like yesterday lapping the circuit in the 2011 Virgin, it is expected the new car will be ready just in time for the final pre-season test session next week, also in Barcelona. For now Pic did the best he could to accumulate the track time he so desperately needs to prepare himself for the first race of the season, but like yesterday, he was the slowest driver on track, some 5.4s slower than the fastest man, Hulkenberg.

But again it was Ricciardo who caused another red flag period, this time his Toro Rosso stopped at the end of the pit lane, again the car had to be recovered and brought back to the Toro Rosso pit area before the green flag was waved again.

Ricciardo was nevertheless satisfied with the second day of testing, “The afternoon did not go to plan, but the morning was positive and we did all the runs we had planned for the first part of the day. We worked on making adjustments to the car balance, also trying some different mechanical changes to the car, which is why I did mainly short runs. I could feel the effect of these changes and the car reacted in the way we expected.”

The afternoon was more or less the same as yesterday, teams were running in race trim and collecting important data for the race engineers, and there were no attempts to improve the times set in the morning, and most drivers made long runs on the medium and soft tyres.

Valtteri Bottas was like Petrov eager to gain as much track time in the new Williams as he possibly could, all together he spent 117 laps on the Barcelona circuit. “It was great to get back in the car as I have been waiting for this day since I took part in the young driver test in Abu Dhabi last year,” Bottas said with a smile. “The FW34 again showed good reliability, as we completed 117 laps while doing some interesting tests with the car set-up.”

Red Bull and Vettel were simulating a race this afternoon, complete with pit stops and tyre changes. The only excitement was provided by Hamilton and Vettel who were dicing for positions during their long runs, but the fun was soon over when Hamilton decided to pit and go out for another quick run on new tyres. 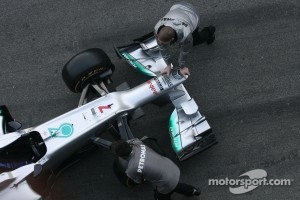 The front wing of the new Mercedes

Rosberg finished 92 laps in the new Mercedes, which has a new feature it today emerged: the W-Duct, a legal form of the F-Duct. When in a straight line, the air goes through a slot at the front of the nose, and is dispersed in a W-shaped form across the front wing, when the car goes through a corner, the air goes to one side of the front wing, which should improve the balance and handling of the car. There are no moving parts thus the device is legal.

Not a word about the W-Duct from Rosberg though, “In the afternoon session, unfortunately we had a transmission oil leak which meant that I wasn't able to complete any further running.” And the German added, “That doesn't affect my positive feelings about our test programme, and things like that can happen in the early stages of running a new car. Now I am looking forward to driving again on Friday.”

As said, times stayed as they were and Hulkenberg, Perez and Vettel took first, second and third position. Also interesting is the number of laps, Hamilton did 120, Bottas 117, Hulkenberg 112, Pic 108 and Vettel 104.

Formula One - On And Off Track Week 8

The United States GP as it happened