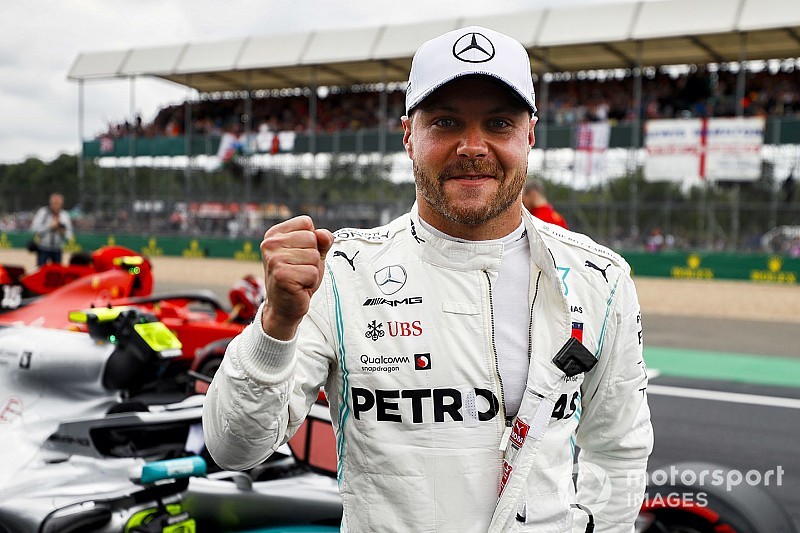 Bottas set the pace on the first runs in Q3 at Silverstone, although Hamilton’s time was compromised by the rear stepping out at Brooklands, which meant he ran wide at the exit of the corner.

Although Bottas was unable to improve on his second run in Q3, Hamilton fell just short of grabbing pole position having not been able to match his first-sector pace from the first run.

Ferrari driver Charles Lerclerc was third-fastest, within a tenth of Bottas, and a tenth of a second clear of the lead Red Bull of Max Verstappen.

Leclerc looked a threat for pole position, but lost time to the Mercedes drivers in the final sector.

Pierre Gasly was fifth-fastest after a strong run during practice, although was 0.314s slower than Verstappen, while Sebastian Vettel was sixth after a difficult run in Q3 in the second Ferrari, lapping six tenths off pole position.

Renault’s Daniel Ricciardo was seventh-fastest ahead of the McLaren of Lando Norris.

Alex Albon did well to reach Q3 in the Toro Rosso and ended up qualifying ninth, lapping 0.041s quicker than the second Renault of Nico Hulkenberg.

The Mercedes and Red Bull drivers will start the race on medium-compound Pirellis thanks to using that tyre to set their Q2 times, with the rest of the top 10 qualifiers using softs.

Alfa Romeo driver Antonio Giovinazzi was quickest of those eliminated in Q2 after being bumped by Vettel at the end of the session.

Giovinazzi was 0.027s of a second quicker than teammate Kimi Raikkonen, who ended up 12th ahead of McLaren driver Carlos Sainz, who failed to improve on his second Q2 run.

Haas driver Romain Grosjean was 14th-fastest ahead of the Racing Point of Sergio Perez, who also failed to improve on his second runs.

Kevin Magnussen was eliminated in Q1 and ended up 16th overall after being jumped by Perez, who was last driver to improve their time in the first segment of qualifying and outpaced the Haas driver by 0.013s.

Magnussen ran through the gravel at the Luffield right-hander on his final lap while “trying to make up for something that wasn’t there”, so was unable to improve on his first-run time.

Toro Rosso driver Daniil Kvyat failed to improve his time on his second set of softs, so ended up 17th after what he described over the radio as a “poor” lap on his final attempt.

Racing Point’s Lance Stroll was eliminated in Q1 for the 10th time in 2019 after running wide at the exit of Stowe and Club on his final lap and losing time.